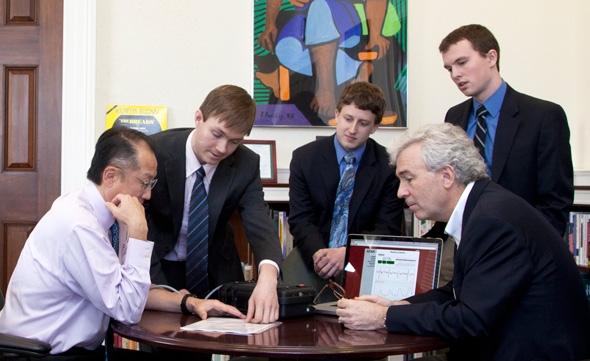 The system could provide a way to remotely monitor atrial fibrillation—the most common heart arrhythmia—on a daily basis. It would enable more timely and effective treatment for the often asymptomatic condition. “A device like this could provide great benefits to underserved communities, in which a large proportion of health care costs are due to a few very ill or poorly managed patients,” says Spielberg.

The concept for the detection system originated with Dan Carlin, MD, founder of WorldClinic, who submitted a proposal to Thayer School of Engineering’s Cook Engineering Design Center (CEDC). For Thayer’s Bachelor of Engineering (BE) program’s two-term capstone project, the CEDC matches students with industry-proposed projects. The final product of the students’ work is delivered to the industry partner at the end of the second term.

“Our decision to work on the project was due to a confluence of reasons: it’s medical, it’s electrical, and it’s computer science,” says Strom. “Jeff and I were in Dartmouth Emergency Medical Services together and had the medical background, so it was a great application of our engineering skills, and Alex had a strong background in computer science.”

“The innovative work that Alex, Jeff, and Adam are doing with Dr. Carlin addresses two important issues in health care delivery today,” say President Kim. “The first is enabling medical professionals to monitor a patient’s health remotely, which means fewer visits to a hospital or doctor’s office. The second is identifying the possibility of a stroke before it occurs. Not only can this save lives, but early intervention can also help patients avoid the extensive therapy that many of those who survive strokes must undergo.” 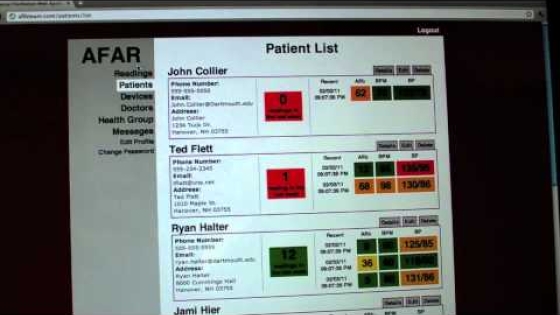 The students began work on the project in fall term 2010 and created a prototype before the winter break. President Kim agreed to serve as their first “patient,” enabling them to test the prototype while getting feedback from a physician who has experience working with the underserved populations the monitor could benefit. The students tested President Kim’s blood pressure and checked for the presence of atrial fibrillation (they report that his results were good) and also consulted with him on possible alternative markets for the product.

“The next steps in a device like this would be further refinement of the components—choosing small, low-power components and placing them on a custom circuit board,” says Strom. “That’s the design process we could go through if we had more time with the product.”