Professor of Religion Ronald M. Green holds the Eunice and Julian Cohen Professorship for the Study of Ethics and Human Values. He has been a member of  the Department of Religion since 1969; he also directs Dartmouth’s Ethics Institute, a consortium of faculty concerned with teaching and research in applied and professional ethics.

We educators hear a lot about the importance of international study and the value of immersing ourselves in cultures and places different from our own. Dartmouth’s students understand this. Most participate in one or more of our many foreign study programs; the value of the expanded perspective and cultural savvy students gain through those experiences is immense. But what about academic study itself? Does place-based learning offer any advantage to understanding the core subjects we also study back in Hanover? I recently had the opportunity to test this question on a visit with students to the homeland of Søren Kierkegaard, one of Europe’s leading 19th-century intellectuals. 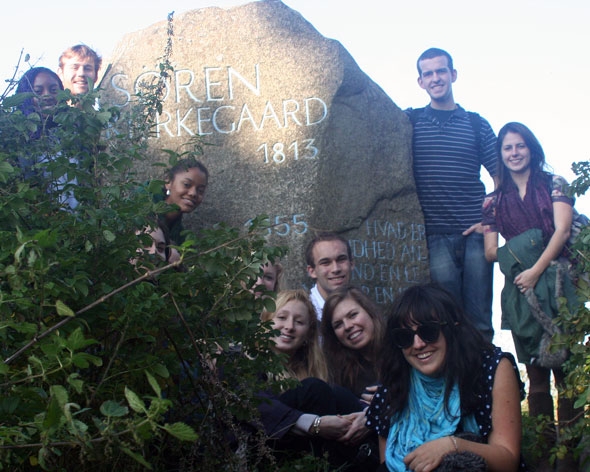 The trip was an offshoot of the religion department’s Foreign Study Program at New College, University of Edinburgh, Scotland, which I led last fall. Students in the program take two courses with New College faculty and a third with me. I chose to teach my course “Kierkegaard and Existentialism.” I had taught this on Dartmouth’s campus before, but being abroad opened a new possibility. Could I take the class to Denmark to visit sites that are key to understanding Kierkegaard? Thanks to funding from a religion department endowment that supports student research and academic travel, the three-day trip was on.

This was not merely to be a travel adventure. As befits the founder of the existentialist tradition, Kierkegaard lived his philosophy. Events in his personal life are woven throughout his thinking. Foremost among these is his relationship with Regina Olsen. When Kierkegaard was 27 and Regina just 18, the two fell deeply in love and became engaged. Then, after a year of equivocation, Kierkegaard broke the engagement and fled from Copenhagen to Berlin. There, he swiftly composed two of his most important books, Either/Or and Fear and Trembling. The second is still read as Kierkegaard’s coded message to Regina explaining his conduct: God had called him away from marriage into the solitary life of a religious author.

Our plan was to see museums and sites important to Kierkegaard’s biography, including the Kierkegaard Research Center in Copenhagen. During our visit, the director mesmerized the students with little-known anecdotes about Kierkegaard’s life and penetrating insights into his philosophy. As we exited into the early Copenhagen evening, students buzzed about what they had just heard, and a few discussed returning to the center for a senior thesis project.

Saturday’s destination was Gilleleje, a small town north of Copenhagen on Zealand’s coast. Here in the summer of 1835, while on vacation from his university studies, the 22-year-old Kierkegaard walked the coast and wrote in his journal: “What I really need is to be clear about what I am to do.... It is a question of finding a truth that is a truth for me, of finding the idea for which I am willing to live and die.”

Today, you can follow Kierkegaard’s route, a sandy path a hundred meters above the sea that stretches for about three kilometers and ends at a boulder inscribed with his words. As we walked, I wondered if the students—about the same age as Kierkegaard when he wrote those lines—were asking themselves the same sort of question: What they might do with the rest of their lives?

On Sunday morning, we met at the Kierkegaard Room of the Copenhagen City Museum. Here was Kierkegaard’s high desk and the “modern” steel pens that speeded his writing. Here was the engagement ring that Søren gave Regina. (When she returned it, he had it fashioned into a cross.) And here, too, was the fine mahogany cabinet that Kierkegaard made to preserve “everything that reminds me of her.” In his journals, Kierkegaard tells us that when he first tried to break the engagement, Regina “fought like a lioness.” At one point, in her agony, she offered to settle for living in a little cupboard if she could only stay with him. Kierkegaard had the cabinet made in memory of her desperate plea. 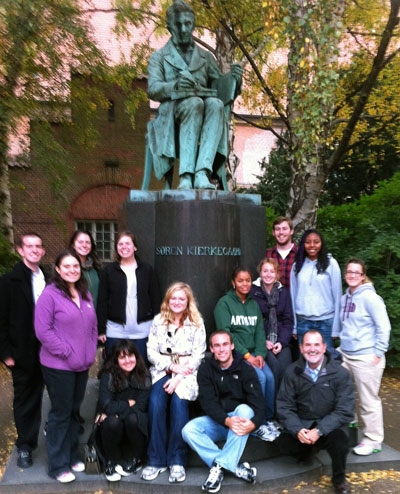 Our final stop was the Kierkegaard family gravesite in the Assistens Cemetery. It is a lesson in stone. Here are the names of five Kierkegaard brothers and sisters who died in childhood or youth. Their deaths fed the melancholy of Kierkegaard’s father, which he imparted to his two surviving sons. That melancholy—what Kierkegaard called “the thorn in my flesh”—contributed to his choice of a solitary life and helped inspire the penetrating analyses of anxiety and despair that are among his greatest contributions to existentialist literature. To my surprise, the students purchased flowers to place on his grave.

Regina was buried in the same cemetery. Six years after the break with Kierkegaard, she married and eventually accompanied her husband to the West Indies. Regina returned to Denmark after Kierkegaard’s death and lived until 1904. It is said that in her very old age she sometimes introduced herself to visitors as “Mrs. Kierkegaard.” With the departure of our airport train looming, there was only time for a hurried search. Not fifty meters away we found her grave.

Our trip took place three weeks into our course, and it inspired everything that followed. I have taught this course often before, but this year was different. Enthusiasm for Kierkegaard’s writings marked the students’ essays and class discussions. We were no longer talking about some remote nineteenth-century thinker, but about “Søren,” whose path they had literally followed.

I could say many things about the educational depth this trip added to the course, but I think one of the students summed it up best:

“Existentialism is clearly a philosophy that values living by the choices one makes, but also about actually experiencing these choices as you make them. By visiting Denmark, we saw just how profoundly Kierkegaard’s philosophy was impacted by his own life experiences. Yes, you could probably read about the impact of one on another in a book, but that’s not the same thing as seeing the interior of the Frue Kirke and imagining Regina and Søren exchanging glances. It’s not the same thing as standing on the Gillejeje coast and contemplating not only Kierkegaard’s ultimate truth, but also your own, personal ultimate truth.”

Written by
Ronald Green
Share this
FacebookTwitterEmail
In the News