As the women’s ice hockey team plays in the NCAA tournament this weekend (the ninth time for the program), they’ll have a few more young fans in the Upper Valley cheering them on. That’s because this past winter, on Sunday mornings following home games, members of the team delivered one-on-one lessons to kids and others on Hanover’s frozen Occom Pond. 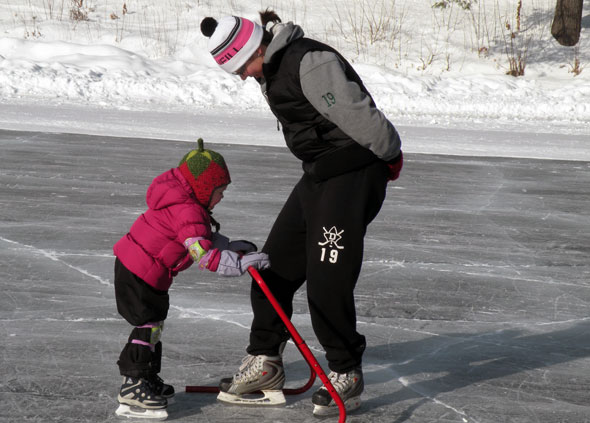 Reagan Fischer ’12, named one of the two best defensive forwards in the ECAC, teaches a four-year-old how to skate on Occom Pond in Hanover. Fischer said getting high fives from some of the same kids at their games “was one of the best parts.” (photo by Maura Smith)

Led by Erica Dobos ’12, a forward from Bethel Park, Pa., and Reagan Fischer ’12, a defensive-forward from Irma, Alberta, three or four members of the women’s hockey team would gather on the pond and give skating tips to anyone—Dartmouth students and adults, but mainly kids under age 10.

Often crouching down close to the ice to stress the importance of bended knees, the players used barrels or specially designed bars to help guide inexperienced skaters. Dobos says, “There was nothing better than seeing people smiling after taking their first stride, or to seem them laughing after falling on the ice and realizing it wasn’t so bad. It was a nice change of pace to be around people who haven’t skated before, and it was great to see some of them turn into fans and be in the stands at the games.” 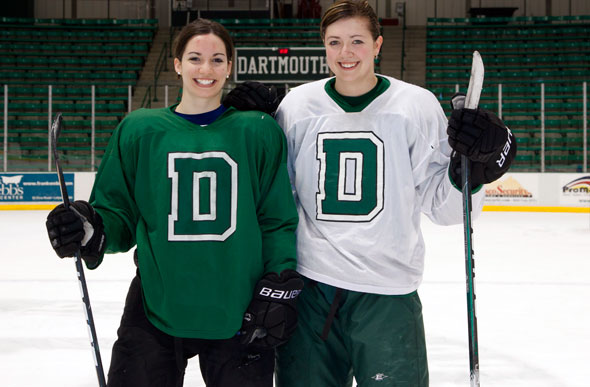 Erica Dobos ’12 (left) and Reagan Fischer ’12 at Thompson Arena. The photo was taken on March 10, just before the team left for a six-hour bus trip to New York for their NCAA tournament game against Cornell. (photo by Joseph Mehling ’69)

Mike Silverman, director of the Dartmouth Cross Country Ski Center, which is located at Occom Pond, worked with the players to arrange the lessons, which were provided free of charge from 9 to 11 a.m. “It was an impressive effort, especially considering they had just played so hard in two competitive games,” says Silverman, who estimates nearly 100 community members received lessons. “These are talented, Division I athletes, and it’s wonderful to see them spend their free time teaching kids how to skate.”

Hanover resident Andrew Richman took advantage of the lessons with his 5-year-old and 4-year-old. “It was great for my kids to be taught by someone who was young enough to be cool and exciting but old enough to know what she is doing. The hockey players are great role models—they were very patient and nurturing at Occom Pond but tough and competitive at Thompson Arena.”

Fischer says, “Our Dartmouth hockey program thrives on the support of our community, and we don’t always get a chance to show our appreciation. I now know by name many of the kids who come to our games and give us high-fives as we come on and off the ice. I can only hope that this experience was as rewarding for others as it was for me.“

Will the lessons be given next year? “Absolutely,” says Dobos.

Learn more about the women’s hockey matchup against Cornell this Saturday.