One of the world’s best skiers is now a Dartmouth student. Hannah Kearney ’15, the 2011 World Cup Overall champion in freestyle moguls skiing and a 2010 Olympic gold medalist, started classes on March 28, the first day of spring term. Kearney’s 2011 skiing season, an affair that took her 40,000 miles to nine countries, ended with her winning the U.S. Freestyle Championships on March 25. 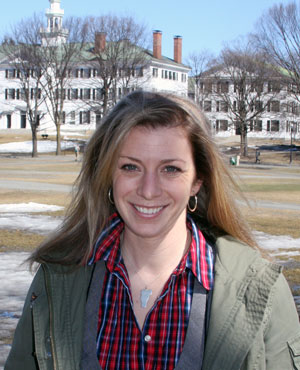 Kearney, who was raised and still lives in Norwich, Vt. (just across the Connecticut River from Dartmouth), has skied competitively since high school. She says, “Not taking anything away from the members of the U.S. Ski Team, who have been my family for the past 10 years, but being in the Dartmouth environment will allow me to branch out, and get exposure to new ideas. After traveling the world it’s become apparent that this community and this college is very special, and beautiful.”

It’s difficult to overstate Kearney’s success in the world of freestyle and mogul skiing. In the 2011 World Cup season she won nine of the 11 events and finished in first place, outpacing more than 130 international competitors to take the overall crown. She was the first to win that many events, and the first American to win the overall freestyle cup since 2005. This follows Kearney’s high-pressure performance in the 2010 Winter Olympics, when millions watched her beat Jennifer Heil of Canada in the moguls event to win the first gold medal of the games for the United States.

Maria Laskaris ’84, dean of admissions and financial aid, says, “Hannah is driven, focused, and she’s experienced remarkable international success on the ski slopes. But she’s also down-to-earth and generous with her time and energy in the local community.” When Kearney received an award from the North American Snowsports Journalists Association, ski writer Peggy Shin said, “Every journalist I know wants to interview Hannah. She’s smart, focused, enthusiastic, and articulate.” 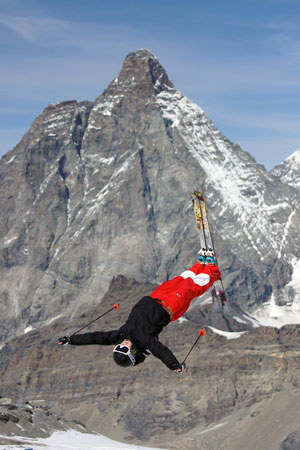 Her three classes are “Price System: Analysis, Problems, and Policies,” in economics; “Crusades and Culture 1095-1350,” in history; and “Animals and Women in Western Literature,” an interdisciplinary class offered by the English department and Women’s and Gender Studies program. Kearney says, “It’s refreshing to use my brain for academic reasons, but it’s also exhausting,” she says. “I went to Wheelock Books after my first day and bought what turned out to be fifteen textbooks. To read them in spring term, over nine or 10 weeks, I’m going to have to pick up my pace.”

Kearney says her tentative Dartmouth plan involves being on campus again in the fall of 2011 and spring terms afterward, with a potential graduation date in 2016. She plans to intensify her ski training as she prepares for the next World Cup in 2013 and the 2014 Winter Olympics in Sochi, Russia.

But for now, Kearney says she’s happy to unpack her bags and devote her energy to being a Dartmouth student. “This is really different, but it’s going well,” she says.

Dartmouth and the Winter Olympics