A team of Dartmouth undergraduate and graduate students finished in the top four at the 2011 Emory Global Health Case Competition in Atlanta, Ga. Saryah Azmat ’11; Cameron Nutt ’11; Vaidehi Mujumdar ’13; Allison Arensman, Tuck ’11, DMS ’11; and Maija Cheung, DMS ’13 competed against 20 teams from 13 universities in late March, winning an honorable mention award and a $1,000 cash prize. Teams from Emory University won both first and second place honors, while the University of California at San Francisco also received an honorable mention award as a top-four finisher. 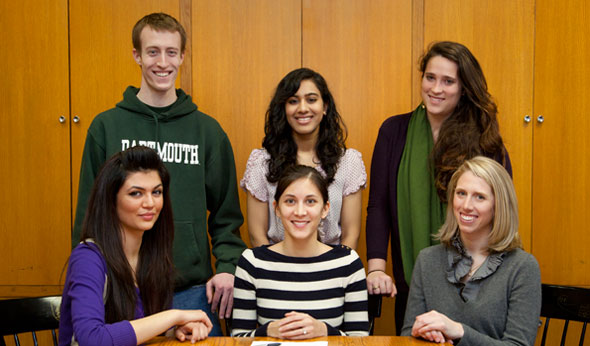 The Emory competition was structured as a case study in which students from at least three different academic fields worked as a team to develop a solution to a global health problem, which they received the week of the competition. This year, the 120 competitors were asked to develop recommendations for the following fictional scenario: the director of programming at the East Africa regional office of the United Nations High Commissioner for Refugees had to prioritize programs for 800,000 refugees after receiving a 40 percent budget cut for 2012.

“Our overarching strategy was to use the climate of fiscal austerity to focus on efficiency and to use data to drive forward future investment in a rights-based health services system,” said Nutt. “We decided from the outset that we wanted to build our recommendations on a solid base of evidence collected through a dynamic data collection platform.”

The Dartmouth team, sponsored by the Dickey Center and the Dartmouth Center for Health Care Delivery Science, demonstrated their solutions in a 30-minute presentation to a panel of judges before being selected as one of four finalists. These teams were then given an additional case challenge, which they addressed in a second demonstration before a new panel of judges.

The Dartmouth team will present their prize-winning proposal on campus on Wednesday, April 27, from 5 to 6 p.m. in Haldeman 031.

The focus of the competition was to bring together students to create innovative solutions for 21st-century global health issues. The Dartmouth team blended both graduate and undergraduate students, as well as students with backgrounds in anthropology, business, engineering, geography, global health, and medicine, to create a truly diverse and multidisciplinary team.

“I think it’s a great opportunity for students who think that they could not get involved in global health care because of their background, and to really open up people’s perspectives on the education they received,” said Azmat. “Dartmouth provides an excellent education that really allows people to function together no matter what they specialize in because of their basic liberal arts education.”

“I was very proud of the Dartmouth team for their innovative, comprehensive, and outcomes-based approach to improvement of health and well-being,” says Presidential Fellow Molly Bode ’09, who served as the team’s staff mentor. “But I was also impressed that our team did so well considering that the other finalist teams consisted mostly of graduate students.” The Dartmouth team had three undergraduate students, while only one other school among the finalists had an undergraduate on its team. “This speaks wonderfully about the caliber of Dartmouth’s undergraduates and their ability to think critically about issues.”

The Emory Global Health Case Competition was founded in 2009, and this was the first year it was open to national competitors.