Dartmouth’s Hopkins Center for the Arts is one of three U.S. arts centers to present a work by an internationally known New Zealand-based dance theater company that gives a powerful voice to the culture and concerns of the Pacific’s indigenous people—while also riveting the contemporary dance world. Tempest: Without a Body, by Lemi Ponifasio/MAU, will be performed in the Moore Theater on Friday and Saturday, April 15 and 16, at 8 p.m. With the only other American appearances in Los Angeles and San Francisco, the Hop’s are the only East Coast performances of this show, which has also been performed in major European and Pacific theaters and festivals.

Tempest: Without a Body is a ferocious reflection on personal liberty and our current world, entwining formally precise dancing with elements of theater, ritual, and social activism. Infused with the potent shadows of painter Paul Klee’s Angelus Novus, Tempest interweaves elements of Shakespeare’s Tempest and Italian political philosopher Giorgio Agamben’s concept of “the Sacred Man,” in which a society classifies some people as undeserving of full rights and respect.

Incorporating video imagery, Tempest includes the huge projected face of Ahmed Zaoui, an Algerian refugee linked with an Islamic organization who was jailed for four years by the New Zealand government.

The Hop offers free pre-performance talks at 7:30 p.m. on both April 14 and 15 in Wilson Hall 219 by Hop Director of Programming Margaret Lawrence, discussing symbols and signposts in MAU’s work.

Born in a tiny village in Samoa, Ponifasio followed up his university studies with a long apprenticeship in dance and theater around the globe, including ballet, contemporary dance and the Japanese avante-garde movement form butoh. He founded MAU in 1995 (naming the company after after a non-violent Samoan independence movement from the early 1900s), envisioning a company of artists from the various areas of the Pacific that would present the region’s stories, legends and myths. The company is now is a regular at major international theaters and festivals in Europe and the Pacific. MAU’s dancers are either Maori, the indigenous people of New Zealand who make up 20 percent of its population, or migrants from other indigenous communities throughout the South Pacific Islands. Ponifasio remains deeply rooted in indigenous Pacific culture, holding the rank of High Chief, or Sala, in Samoa. 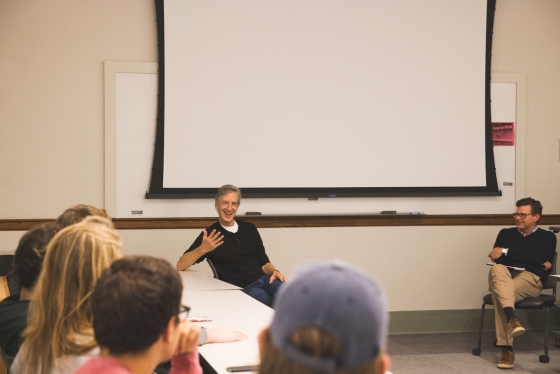