Martha Johnson Beattie, a 1976 Dartmouth graduate and former president of the Alumni Council, has been appointed Dartmouth’s vice president for Alumni Relations. Beattie will assume her new role on May 9, 2011. 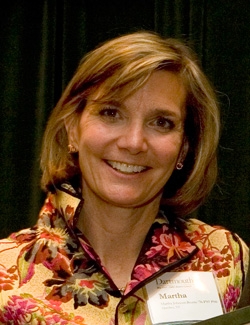 Beattie has had a 30-year career as a teacher of math, a crew coach, and a volunteer leader and board member for a range of charities and schools. “The common theme throughout Martha’s career has been her focus on inspiring people to work toward a common goal, and her impressive record of developing their skills and knowledge, enabling them to succeed,” said Senior Vice President for Advancement Carolyn Pelzel. “Her passion for and knowledge of Dartmouth will help us serve and engage alumni in the years to come.”

The vice president for Alumni Relations is charged with strengthening connections with Dartmouth’s 70,000 alumni and engaging them in the life of the College. As a member of the senior leadership team within the Advancement division, the vice president also plays an active role with colleagues in developing strategies for outreach to alumni and parents, communications, and fundraising.

“I am thrilled to be coming home to Dartmouth,” said Beattie. “It will be an honor to collaborate with the people and groups that support the school on a daily basis. I look forward to working with the Advancement team and the alumni body as we build on the traditions of this extraordinary institution.”

Beattie’s appointment follows a national search that involved extensive consultation with Dartmouth alumni, facilitated by the search firm of Isaacson Miller. The search committee was led by Peter Hackett ’75, the Avalon Professor in the Humanities and chair of Dartmouth’s theater department. The committee also included Veree Brown ’93, first vice president of the Association of Alumni; Dave Hodgson ’78, chair of the President’s Leadership Council; Jeffrey Horrell, dean of libraries and librarian of the College; Sylvia Racca, executive director of the Dartmouth College Fund; Tom Peisch ’70, president of the Alumni Council; and Ralph Manuel ’58, Tuck ’59, a member of the Class of 1958 Executive Committee and former president of his class.

“We interviewed a truly exceptional group of finalists,” said Hackett. “Martha’s deep understanding of our alumni—not only of their enthusiasm for Dartmouth but also their concerns and questions—was among the attributes that made her a compelling candidate. Her proven ability to work collaboratively with others to meet challenges will make her an outstanding leader.”

Beattie earned her mathematics degree magna cum laude as member of Dartmouth’s first four-year class to matriculate women. She started her career at Phillips Academy in Andover, Mass., where she taught math and coached skiing and varsity boys and girls crew. From there she moved to Seattle, where she taught at the Lakeside School and coached girls’ crew. In 1983 she was named head coach for the U.S Women’s Junior National Crew Team; under her leadership the team achieved the best international finish of any U.S. Junior Girls Eight to date. She is the founder of one of the first masters women’s crews in the United States. Her coaching career continued at Selwyn House School, Hanover High School, Winsor School, and Dartmouth College.

Following her graduation, Beattie became involved in serving Dartmouth through class fundraising and reunion committee work and has been active as an alumni admissions interviewer. In 2001, she joined the Alumni Council and was elected president of the council in 2006. Working with fellow councilors, she initiated the creation of and later chaired the Alumni Liaison Committee, a group that meets regularly with members of the Board of Trustees to convey alumni sentiment on a range of topics. In 2006, she received a Dartmouth College Citation as co-chair of a fundraising effort that achieved the highest percentage of donors for a 30th reunion. In 2010, she was chosen for the Dartmouth College Alumni Award, the College’s highest honor for alumni service.

Throughout her career, Beattie has been actively involved in her children’s schools and in her communities, serving on the board of The Northwest Children’s Fund and the George Pocock Rowing Foundation, and as a part-time coach with the Upper Valley Rowing Foundation and the New London Rowing Club. Martha and her husband Jim Beattie ’76 are the parents of three children. Their son Sam graduated from Dartmouth in 2007 and their daughter Nell in 2009; their daughter Sarah is Class of 2011 at Claremont McKenna College in California.

Beattie succeeds Patsy Fisher ’81, director of Class and Club Activities, who has served as acting vice president of Alumni Relations during the search.