A Seat at the Table: A Dartmouth Student’s Look at Egypt’s Future

The future of Egypt remains front and center in the mind of Mostafa Heddaya, a member of the Class of 2011 from Bellevue, Wash., whose family hails from Alexandria, Egypt. As Heddaya was completing his honors thesis earlier this year on political opposition in Egyptian legislative elections, a revolution began. His thesis advisor, Professor of Government John Carey, was scheduled to participate in a roundtable discussion with various policymakers at the National Endowment for Democracy in Washington, D.C., on just this topic, and he asked Heddaya to come with him. The discussion took place on Feb. 11, the day Egyptian President Hosni Mubarak resigned. 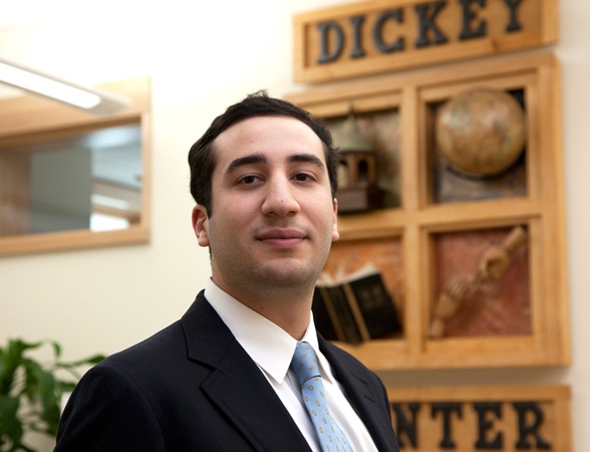 Research for his senior honors thesis prepared Mostafa Heddaya ’11 to present a briefing on Egyptian electoral and constitutional concerns to policymakers in Washington, D.C. (photo by Joseph Mehling ’69)

Here is Heddaya’s view of his experience with the people who could play an important role in post-dictatorship Egypt.

As the unrest started in Egypt and ultimately turned into a full-on revolution, what were you feeling as you watched this story unfold?

I was, of course, concerned about the well-being of friends and family, but like most Egyptians, was ultimately glad to see Mubarak go. There was certainly a lot of anxiety at times when the events seemed to blur the line between democratic uprising and military coup, especially when Mubarak first stepped down, but thus far the Supreme Council of the Armed Forces (the military council that is running the state) has been reasonably moderate in its dealings with the reformist movement.

Do you still have family in Egypt? What do they say about what it was like?

I think for a lot of people on the ground there was definitely the sense that something historic and legitimate was happening. For most of my relatives, and for almost all Egyptians, these protests were their first authentic opportunity to participate politically. It’s very hard for people who take democratic participation somewhat for granted—as we often do in the West, myself included—to conceptualize how meaningful this authentic political experience can be for the oppressed citizen. The relatively high turnout in the March 19 constitutional plebiscite and the general excitement surrounding that vote definitely suggest that people are interested in meaningful democratic participation.

How did you find out about this opportunity to go to Washington, D.C.?

My advisor, Professor John Carey, and a few of his academic colleagues regularly do electoral consulting work for governments and NGOs, so when the situation in Egypt broke, he was contacted by a colleague looking to fulfill a White House advisor’s request for a brief on the electoral system in Egypt. I had been studying the subject since last spring when I decided to write my thesis about opposition behavior in the Egyptian People’s Assembly elections, so Professor Carey asked me if I could help out. The memo I wrote was well received, and I collaborated with Professor Carey and his colleague on a few other related briefs. Based on this work we were extended an invitation to attend a closed-door roundtable at the National Endowment for Democracy on the Egyptian situation.

What did it feel like to be there with these important policymakers discussing the future of Egypt?

It was definitely one of the most memorable experiences of my time at Dartmouth. Although we are fortunate to have social science faculty (and frequent visitors to the College) who are themselves key participants in the policy process, it is exciting to sit in a room full of people who are trying to solve a live problem—something that’s going on in the world in real time. It was of course also great to meet members of the academic and government communities whose work I had read in some of my classes or cited in my thesis and be able to have those connections.

What were some of your recommendations?

The memos and briefs made various recommendations, generally focused around electoral and constitutional concerns, as the situation has evolved. On electoral issues, the most recent memo we put together cautions against holding People’s Assembly elections within too limited a timeframe and under the old electoral framework. I also wrote a memo on gender inequality as it relates to issues of political participation, and how the U.S. can support some of the institutions working to resolve these issues in Egypt.

Has your perspective on Egypt changed since this experience?

The uprising of January 25 was certainly an historic moment, and it was, on a personal level, very gratifying to see the Egyptian people reclaim their country, and in a non-violent way. The public demonstrations were immense sources of hope for me and demonstrated the renewed commitment Egyptians have to each other and to their country. More importantly, I hope that the changes we are witnessing herald a new paradigm in Egypt, one where the state is democratically responsive to citizens, and real work can be done resolving some of the serious issues plaguing Egyptian society.