[[{“type”:“media”,“view_mode”:“media_large”,“fid”:null,“attributes”:{“class”:“media-image size-full wp-image-4848 alignright”,“typeof”:“foaf:Image”,“style”:“”,“width”:“75”,“height”:“75”,“alt”:“Dartmouth Shield”}}]]On April 12, 2011, the Supreme Court of New Hampshire issued an opinion in the Brooks v. Dartmouth lawsuit, affirming the lower court’s January 2010 dismissal of a challenge to governance reforms adopted by Dartmouth’s Board of Trustees.

The Brooks suit, which was filed November 2008, is the second lawsuit challenging the Dartmouth College Board of Trustees’ September 2007 decision to expand the size of the Board. Filed by seven alumni, the Brooks suit sought to require the College to seat an equal number of trustees nominated and elected by the Board (Charter Trustees) and trustees nominated by alumni and elected by the Board (Alumni Trustees).

Dartmouth’s General Counsel Robert Donin said, “We are pleased that the New Hampshire Supreme Court has decided to bring this long and costly litigation to an end.”

The April 12 ruling brings to an end more than three years of litigation challenging the Board of Trustee’s 2007 decision concerning the size, composition, and method of selection of the Board.

A copy of the court’s order is available on the online (82KB pdf).

Gillibrand ’88 Honored as the First Alumna in Congress 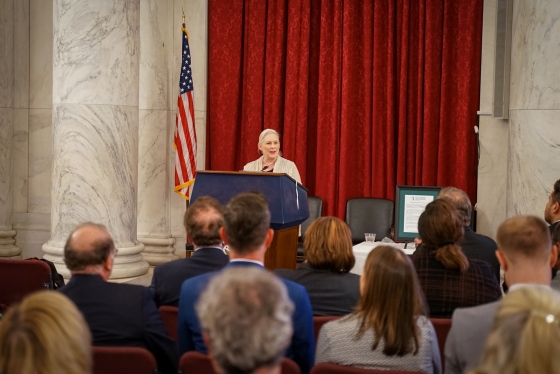 The custom of  ‘Dartmouth Night’ was successfully inaugurated, and will be a most pleasing feature of college life.