Since joining the Dartmouth Investment in Philanthropy Program (DIPP) as first-year students, co-presidents Alex Martinian ’11, Tiffany Tai ’11, and Valentin Yanev ’11 watched the economy plummet to depths not seen since the Great Depression. “When the market fell apart and our portfolio did too, we thought it could be years before we ever could carry out our purpose of helping others,” says Martinian. The student-run club has dual goals of developing investing skills and making philanthropic gifts with the proceeds. 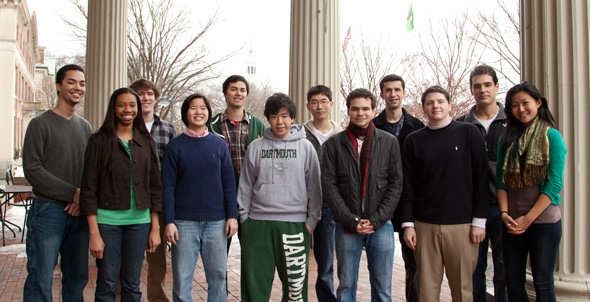 “We are fortunate our portfolio has performed well and we can put our proceeds to help others and fulfill the mission we have been working on the past four years,” adds Martinian, who hails from La Cañada, Calif., and has accepted a post-graduation position as an equity research associate analyst at T. Rowe Price in Baltimore.

“After years of not being in a position to contribute anything to others, we are very excited to finally be able to help three campus organizations and see our efforts go toward philanthropic endeavors,” says Tai, a Tulsa, Okla., native who will work in investment banking for Deutsche Bank in New York City after graduation.

DIPP was established in January 2007 by Marco Tablada, Tuck ’98; David Craver, Tuck ’97; and Leslie Dahl ’85. The three, along with their colleagues at Lone Pine Capital (LPC), wanted to honor the hedge fund’s founder, Stephen Mandel Jr.’78, now chair of Dartmouth’s Board of Trustees, on his 50th birthday. “We thought it was a great way to give back to Dartmouth, which Steve loves, and to combine his passion for investing and philanthropy,” says Tablada, LPC’s managing director. “DIPP fosters students’ ability to learn how to invest money while also teaching them the importance of giving back. And it’s run by the students. We couldn’t be more pleased with their success.”

“Out of a total of eight applicants, the task force selected four that would present in front of the investment committee. Out of these four, we gave out three awards,” says Yanev, who is originally from Varna, Bulgaria, a coastal city on the Black Sea. He will join Oliver Wyman Financial Services in New York City after graduation.

The group has three key investing tenets and tries to find the “select few companies that satisfy all three,” says Martinian. “First, we want to find strong businesses with durable competitive advantages over competitors. We think of our investments as three- to five-year holdings so we want to make sure our companies can thrive over the long term. Secondly, we like companies with solid balance sheets that do not have too much debt. This really helped us in the market downturn as our stocks held up better than most because they were not levered up too much. Finally, we like our companies to be trading at attractive prices at a significant discount to what we think they are actually worth. To that end, we perform discounted cash flow analysis and also look at comparable ratios like price to earnings.”

He notes that the group has relatively few holdings, with about 20 stocks in total. These include Berkshire Hathaway, Cosan, General Electric, Coca-Cola, and Schlumberger. “We want to limit our portfolio to our best ideas and we do not have a lot of turnover in the stocks we hold,” says Martinian, adding that DIPP had $320,000 in its fund, 82 percent in stocks and 18 percent in cash, at the end of January 2011.

In offering advice to young investors, the trio advises seeking out the best mentors and reading the works of great investors, such as Warren Buffett and Peter Lynch. While Tai says there is no set way to invest and young investors shouldn’t be afraid to try new techniques, she adds that, “Seeking out information about how businesses operate and finance their operations is very important and can range from something as basic as reading the Wall Street Journal to more in-depth analysis such as studying Benjamin Graham and David Dodd’s book Security Analysis.”

For all three co-presidents, the group has been an integral part of their undergraduate experience. “DIPP has been my most important extracurricular activity and my number one leadership experience,” says Valentin. “After putting in countless hours of investment research and analysis, working and debating with teammates to select good investments, all of us are proud to create an impact on the Dartmouth community and the Upper Valley. Most importantly, however, we are excited to make this possible in a sustainable way in order to have a truly lasting effect and donate again in the future.”