US Secretary of Energy to Address Energy Symposium 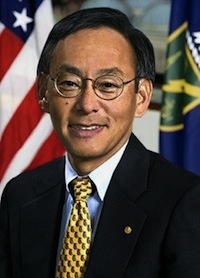 Steven Chu, United States Secretary of Energy, will be the keynote speaker at the third annual “Great Issues in Energy” symposium, “Energy Innovation and America’s Competitiveness,” hosted by Thayer School of Engineering on Thursday, April 28, 2011.

Chu is a distinguished scientist and co-winner of the Nobel Prize in Physics in 1997. He has devoted his recent scientific career to the search for new solutions to global energy challenges. As Secretary of Energy, he is charged with helping implement President Obama’s agenda to invest in clean energy, reduce the country’s dependence on foreign oil, address the global climate crisis, and create new jobs.

Chu will give a public lecture from 4 to 5 p.m. in Cook Auditorium, which will be followed by a question and answer session from 5 to 6 p.m. and a reception at 6 p.m. For more information, see the Thayer News and Events site.