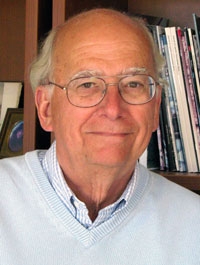 Michael S. Gazzaniga earned an AB degree from Dartmouth College in 1961. He went on, in 1964, to receive a PhD in psychobiology from the California Institute of Technology, where he also completed a two-year post-graduate fellowship, followed by a National Institute of Health fellowship at the Institute of Physiology, in Pisa, Italy, in 1966.

He was dean of the Faculty of Arts and Sciences at Dartmouth College from 2002 to 2004 and also the Andrew W. Thomson Jr. Professor of Psychiatry and director of the Cognitive Neuroscience Program at Dartmouth Medical School from 1988 to 1992. At the medical school, he founded the country’s first cognitive neuroscience degree-granting program. In 1996, he was the David T. McLaughlin Distinguished Professor of Psychological and Brain Sciences and director for the Center for Cognitive Neuroscience.

Gazzaniga is currently professor of psychological and brain sciences at the University of California, Santa Barbara, and director of its Sage Center for the Study of the Mind.

In addition to UC Santa Barbara and Dartmouth, his teaching and research career has included appointments at the University of California at Davis, Cornell University Medical College, the State University of New York at Stony Brook, and New York University Graduate School.

His work includes cognitive neuroscience and split-brain research, as well as research on how the brain enables the mind. He has made advances in understanding of functional lateralization in the brain and how the cerebral hemispheres communicate with one another.

In May 2011, he was elected to the National Academy of Sciences (NAS), one of the highest honors that can be accorded a U.S. scientist or engineer. Election to the NAS honors distinguished and continuing achievements in original research.

He has published many books, notably Human, The Ethical Brain, Mind Matters, The Social Brain and Nature’s Mind. His new book, Who’s in Charge? Free Will and the Science of the Brain will be out in fall 2011. His many scholarly publications include the landmark 1995 book for MIT Press, The Cognitive Neurosciences, now in its fourth edition, which is recognized as the sourcebook for the field.

Gazzaniga has participated in public television specials The Brain and The Mind, which have been instrumental in making information about brain function generally accessible and have been essential in obtaining public support for clinical and basic science research.