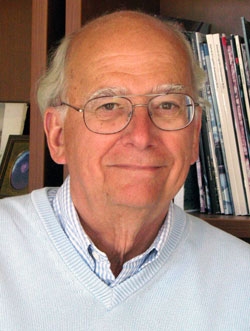 Neuroscientist Michael Gazzaniga, a member of the Dartmouth Class of 1961 and a new member of the National Academy of Sciences, was dean of the faculty from 2002 to 2004. (photo by George Fousham)

Michael Gazzaniga ’61, a former dean of the Faculty of Arts and Sciences at Dartmouth, has been elected to the National Academy of Sciences (NAS).

Gazzaniga was dean of the faculty from 2002 to 2004. He was also the Andrew W. Thomson Jr. Professor of Psychiatry and director of the Cognitive Neuroscience Program at Dartmouth Medical School from 1988 to 1992. In 1996, he became the David T. McLaughlin Distinguished Professor of Psychological and Brain Sciences and was the director for the Center for Cognitive Neuroscience.

Gazzaniga is currently a professor in the Department of Psychological and Brain Sciences at the University of California Santa Barbara and director of its Sage Center for the Study of the Mind. His work includes cognitive neuroscience and split-brain research, as well as research on how the brain enables the mind.

“Well, it is terribly gratifying and at the same time, humbling,” Gazzaniga said of being elected. “I have spent my life around top scientists, many of them at Dartmouth. Lots of people contribute to this kind of thing, and I am appreciative of that fact.”

Gazzaniga was one of 72 new members from the United States, as well as 18 foreign associates from 15 countries, who were elected to NAS in recognition of their distinguished and continuing achievements in original research.

Election to the NAS is considered one of the highest honors that can be accorded a U.S. scientist or engineer. There are a total of 2,113 active members and 418 foreign associates. The new members will be inducted into the academy next April at the group’s annual meeting in Washington, D.C.

It was during his time as an undergraduate at Dartmouth when Gazzaniga’s immersion into science began.

“Psychology Professor William Smith pulled me into his lab in McNutt Hall 53 years ago and put me to work, and I have never looked back,” he said. “He encouraged me to spend my junior summer at Caltech, where I worked with Roger Sperry and became totally enthralled with research. Great professors opened the doors to science for me, and science is energizing new solutions to issues around the world.”

He recommends Dartmouth students take a similar tack during their time at the College. “There is a lot one can do at Dartmouth. Jump into someone’s lab. Only good can come from it. When I was there as a professor, the Women in Science Project did a brilliant job involving women students early on in science. The world is full of problems. Discover your passions and go for it. Dartmouth is there to let the flourishing begin.”