Dartmouth President Jim Yong Kim today announced that he has appointed Charlotte H. Johnson, vice president and dean of the college at Colgate University, as Dean of the College at Dartmouth. She will assume her new role in July. 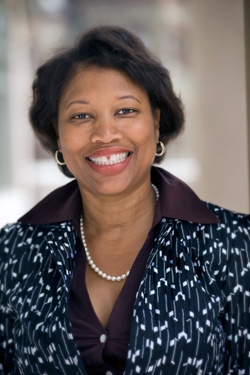 Charlotte H. Johnson brings 14 years of experience working with students to her new role as Dean of the College at Dartmouth. (courtesy of Colgate)

Johnson has been dean at Colgate since 2006, leading a student affairs division of 114 staff in 16 units. Key initiatives she led at Colgate include divisional strategic planning, a structural reorganization, developing and implementing a divisional diversity plan, and re-envisioning an initiative to integrate students’ residential and educational experiences.

In announcing the appointment, Kim said, “Charlotte is a visionary leader in the field of student affairs. Her thoughtful and extremely effective approach to her work at Colgate is widely respected, and we’re thrilled that she’s agreed to join our team at Dartmouth.”

Johnson, who was appointed following a national search, said, “I have long admired Dartmouth and am excited and privileged to be joining President Kim, Provost Folt, and the exceptional leadership team they have assembled. This is an extraordinary opportunity to lead and innovate. I look forward to partnering with the Dean of the College staff, students, faculty, and alumni as Dartmouth continues to distinguish itself as a leader in higher education.”

The Dean of the College is Dartmouth’s senior student affairs officer, providing leadership for a comprehensive set of undergraduate student affairs programs and services. The dean is a member of the president’s leadership team, and is responsible for numerous activities including student support services, counseling services, campus life programs, dining services, health services, judicial affairs, and campus safety. The dean works closely with the faculty to integrate Dartmouth’s curricular and co-curricular experience, and to foster a climate conducive to the academic, personal, and professional success of students.

Provost Carol Folt said Johnson’s “reputation as a strong and inclusive leader will serve her well at Dartmouth. Charlotte combines a genuine affinity for students with outstanding ability to collaborate across the institution and manage a complex organization.”

“Charlotte Johnson’s intelligence, interpersonal skills, administrative acumen, and wit combine to make her a leader who is also a trusted colleague and good friend to students, faculty, and staff,” said Rebecca Chopp, president of Swarthmore College and former president of Colgate. “Her deep commitment to educating moral and visionary leaders for a diverse, global, and constantly changing world in the 21st century will benefit Dartmouth.”

Johnson brings more than 14 years of experience working with students to Dartmouth. Prior to her role at Colgate, she served, from 2000 to 2006, as assistant dean for student affairs at the University of Michigan Law School, and, before that, was the law school’s director of academic services, beginning in 1997. At Michigan, she collaborated with faculty to create new interdisciplinary academic programs. She was also a member of the legal and communications strategy teams that contributed to the defense of the university’s admissions policies in the landmark 2003 Supreme Court case upholding affirmative action in higher education.

Previously, she worked for eight years at Garan Lucow Miller, a law firm in Detroit, where she focused on corporate and municipal defense in cases involving medical devices, insurance coverage, and lawsuits involving exposure to toxic substances. She was the first African American woman to be made a partner of the firm. In 2008, she received the Presidential Award for Outstanding Service from the National Bar Association. Johnson has also presented at national conferences on the importance of access and inclusion in higher education.

Search Committee Chair Michael Mastanduno, Dean of the Faculty of Arts and Sciences, noted that, “Charlotte is exceptionally skilled at bridging the gap between student and academic affairs. She recognizes that we are all working toward the same educational goals, and has a strong record of building partnerships in support of that.”

The national search was facilitated by Parker Executive Search, and the Search Committee solicited community input through a website and three open forums for students, faculty, and Dean of the College staff. Search Committee members represented a range of areas within the College. In addition to Mastanduno and Sonstegard, the members were: Julie Dossantos ’13; N. Bruce Duthu ’80, professor and chair of Native American studies; Evelynn Ellis, vice president for Institutional Diversity and Equity; Maria Laskaris ’84, dean of Admissions and Financial Aid; C. Robertson McClung, professor of biological sciences; Uthman Olagoke ’11; Harry Sheehy, director of Athletics and Recreation; David Spalding ’76, chief of staff in the Office of the President; Eric Tanner ’11, student body president; and Barbara Will, professor of English.

Additionally, she has completed continuing education programs at Harvard’s Graduate School of Education and at Michigan. She was chosen by the Women Lawyers Association of Michigan to be a Menttium Scholar at Menttium Corporation, of Minneapolis, where she completed a program supporting leadership development and diversity for high-performing mid-career level women.

Johnson will take over from Sylvia Spears, who, in August 2009, took on the role of Acting Dean of the College for two years, with the expectation that a national search would be launched during the 2011 academic year.

“Sylvia has skillfully guided the Dean of the College division through the budget process and significant organizational change over these last two years,” Kim said. “Provost Folt and I thank her for her dedication and service.”