Twelve Dartmouth students participated in “Museum Collecting 101,” one of the Hood Museum of Art’s many co-curricular programming initiatives. The course, led by Interim Director and Barbara C. and Harvey P. Hood 1918 Curator of Academic Programming Katherine Hart and Assistant Curator for Special Projects Essi Rönkkö, teaches students about the history of the Hood Museum’s collections as well as informing them about the museum’s mission statement and acquisitions policy. 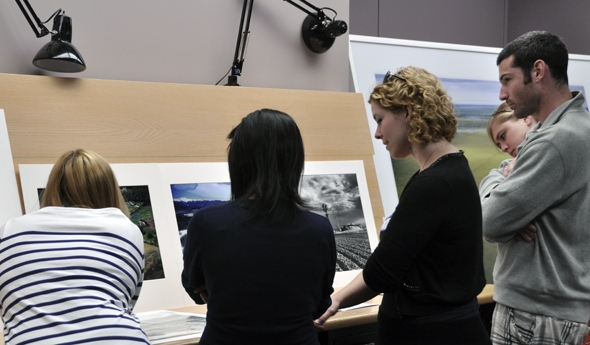 “This class is a great opportunity for the Hood to show students some of the behind-the-scenes work that we do,” says Rönkkö, adding that the course was started nine years ago and is offered once a year, usually during winter or spring term. “It gives the students real-world, hands-on experience on the acquisition process in an art museum. We also believe that ‘Museum Collecting 101’ is a great way for Dartmouth students to learn about issues surrounding collecting, both for museums and on a personal level.”

Throughout the four-week course, students were invited to “think like curators” by considering the Hood’s role as an academic museum and choosing a photograph or print to add to the museum’s collection of environmental photography. The students spent time in the Bernstein Study-Storage Center examining the museum’s current collection of environmental and landscape photography before choosing from the works of seven premiere photographers.

“Discussing with a group of students with different backgrounds was really interesting because I gained a better understanding of other people’s considerations beyond aesthetics or classroom value of individual works,” says Stephenie Lee ’11, an economics major and art history minor. “I think that our generation has very different preferences from other generations, so it’s really cool to have our preferences represented.”

The students ultimately selected a print of J Henry Fair’s “Arsenic is Grey,” which depicts coal ash waste at an electricity generation station in Canadys, S.C. In choosing the piece, the students considered not only the work’s aesthetic qualities but also its educational value and pertinence to future generations. 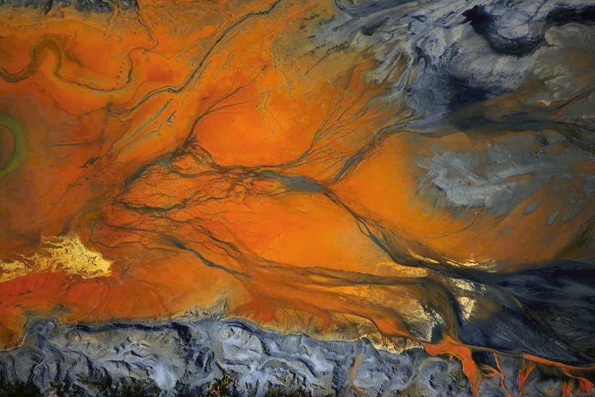 A print of J Henry Fair’s “Arsenic is Grey” was selected for the Hood by students in the Hood Museum of Art Spring 2011 Seminar “Museum Collecting 101.” (© J Henry Fair 2011. Courtesy Gerald Peters Gallery)

“‘Arsenic is Grey’ highlights coal ash, an issue that is relatively unknown to the public—or at least to our class,” says Leigh Latimer ’11, a studio art and psychology double major. “Coal ash is a byproduct of manufacturing plants and is unregulated by the EPA, yet it contains a slurry of toxic chemicals—including arsenic—in high concentration that is shown to leach into ground water in unmeasured quantity. We selected this photograph for its aesthetic qualities and the raw unedited representation of the landscape, as well as for the inherent cross departmental applications in teaching students about environmental destruction from a different perspective.”

The group’s work is recorded permanently in the Hood’s documentation for the image, which reads as follows:

The “Museum Collecting 101” course is sponsored by Kate and Yaz Krehbiel ’91, Thayer ’92, along with Dartmouth’s Class of 1978. More information about the Hood’s extracurricular programming is available online.