“If, by my teaching, I have contributed to the embrace of understanding rather than of ignorance, I will be satisfied.” – Gene Garthwaite, Dartmouth professor of 43 years 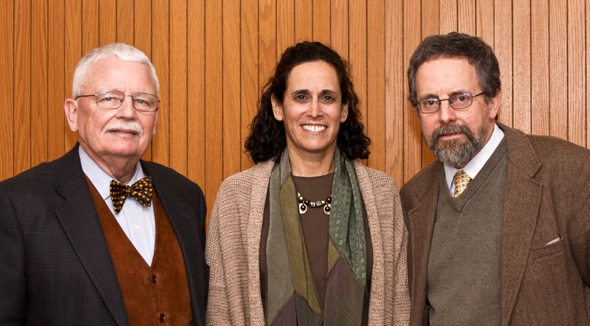 Professor Gene Garthwaite (left), who will retire this year, with Beth Baron ’80 and Andrew Newman ’74, two of about 50 alumni who attended the April event, “Crossing the Green: The Dartmouth Middle East Connection, A Symposium in Honor of Professor Gene R. Garthwaite.” Baron and Newman organized the symposium. (photo by Zach Ingbresten ’11)

“The archetypical undergraduate-orientated academic” is how Andrew Newman ’74, professor of Islamic Studies at the University of Edinburgh, describes his former teacher Gene Garthwaite. Newman says, “Gene was so accessible. I got all my bad habits of turning up early for class and drinking coffee with my students from him.” The Jane and Raphael Bernstein Professor in Asian Studies, Garthwaite, who retires at the end of spring term, has taught Iranian and Middle Eastern history at Dartmouth for 43 years.

Newman was one of about 50 alumni and others who returned to campus in April to honor Garthwaite by attending the two-day symposium, “Crossing the Green: The Dartmouth/Middle East Connection.” Participants included Beth Baron ’80, professor of history at the City University of New York (CUNY) and the co-director of CUNY’s Middle East and Middle Eastern American Center; Colonel Rich Outzen ’89, U.S. military officer and former liaison to Turkey; Gregory Aftandillian ’79, former U.S. foreign policy advisor and Middle East analyst; and history major and current student Fatima Carrillo ’13. U.S. Ambassador to Turkey Francis Ricciardone ’73, who was in Ankara at the time, participated via Skype and said he wouldn’t be an ambassador “if it wasn’t for my formation at Dartmouth by people like Gene Garthwaite.”

One of the pioneering American historians of Iran, Garthwaite’s first experience in the country was working as a camp manager for a University of Chicago archaeological dig. He later wrote, “My daily contact with Iranians in various walks of life developed my interest in and fondness for the Iranian people and their culture.” As a PhD student, Garthwaite conducted groundbreaking research on the Iranian Bakhtiyari tribe, which eventually was published in the book Khans and Shahs. The research, which was some of the first to be based on tribal sources as opposed to British secondary sources, made many historians rethink the history of tribes throughout the Middle East.

Garthwaite’s teaching style is described as relaxed but with a flair for the theatrical. Newman said he still remembers the day Garthwaite showed up to class in a striking Bakhtiyari sheepskin coat. Garthwaite’s longtime assistant, Gail Vernazza, says his khusravi hat was legendary among students. Vernazza says, “For a final exam, students would have to pick the number of their essay questions out of that black hat.” 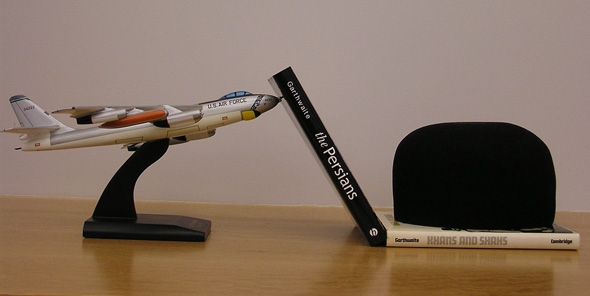 These three items were depicted on some of the symposium materials because they are meaningful to Gene Garthwaite. They are: the Iranian hat known as a khusravi, which Garthwaite used in class; his books The Persians and Khans and Shahs, and a model of the B-47. Garthwaite served as a U.S. Air Force navigator, bombardier, and radar operator on a B-47. (courtesy Gail Vernazza)

Outside the classroom, Garthwaite serves as an active mentor with a remarkable professional network. “He was instrumental in helping me obtain a Fulbright grant, and he helped set me on my path into graduate school,” says Nova Robinson ’06, a PhD student in Middle Eastern women’s history at Rutgers University. Robinson will be teaching her first class in the fall, and she says Garthwaite “embodies what I hope to be.” A former U.S. Air Force navigator, bombardier, and radar operator, Garthwaite also serves as the faculty advisor to the Dartmouth Undergraduate Veterans Association (DUVA).

President Emeritus James Wright started teaching history at Dartmouth the same year as Garthwaite, and the two remain close friends. At a dinner to close the symposium weekend, Wright said, “I think Dartmouth is defined by faculty who are engaged in the work of shaping their field of study, who can’t wait to share their knowledge and their enthusiasm for knowledge with their students, and who willingly share in a sense of responsibility for the College. Who better personifies this model than Gene Garthwaite?”

When asked what he will do during retirement, Garthwaite laughs and says, “I will be doing exactly what I do now except I won’t be teaching.” That includes research, gardening at his home in Hartland, Vt., and serving as an active member of his church.

Read “Journeys to Serendib” (pdf), a brief autobiography that Garthwaite was asked to write for the symposium.