Dartmouth researchers were awarded $14.5 million during February, including $2.3 million in new and competing awards. View the complete list of awards, as reported by the Office of Sponsored Projects. Here, Dartmouth Now spotlights three investigators and their work. 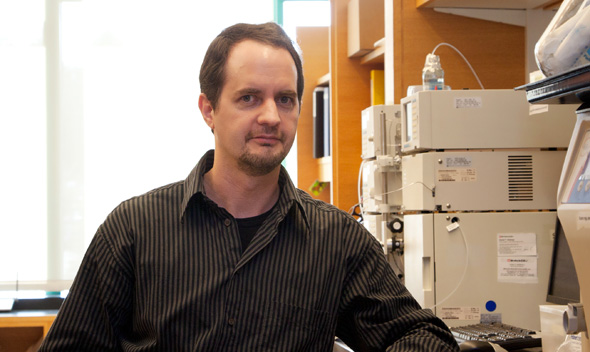 Plentiful peptides: “Our goal is to discover new drugs to treat pancreatic cancer, which has one of the lowest survival rates among all the human cancers,” Spaller explains. His team focuses on a molecular class known as peptides which are abundant in nature and are frequently used in basic biological research.

Major step forward: “We’ve learned a lot about how to make peptides and study their behavior, and that accumulating knowledge helps future projects,” Spaller says. “We are now starting to move more towards designing specially-modified peptides that recognize proteins involved in cancer pathways, and this project represents a first major step in that direction.”

Teamwork: Spaller’s project involves two research teams: one for the chemistry and biochemistry components, which he is leading at Dartmouth, and one for the biology component, which is taking place at the Mayo Clinic. The Dartmouth team includes Ruizhi Zhao, a chemistry graduate student; Alex Pletnev, PhD, a research professor in chemistry; and Edvin Klosi, PhD, a postdoctoral researcher. Spaller is also training several undergraduate students to participate in this project.

Back to the beginning: Stern’s grant focuses on the health of babies and young children who were conceived after assisted reproductive technology (ART). “The health of these children will be compared to that of children born to other couples with subfertility and infertility treatments other than ART and also to fertile couples,” explains Stern. “While previous studies have looked at birth weights and gestational age, this study will focus on illnesses of young children that require hospitalizations and early childhood interventions.”

Family registration: Stern has been involved in numerous studies of ART outcome and is also working on a National Institute of Child Health and Human Development-funded project to develop an Infertility Family Research Registry (IFRR) to look at long-term outcomes of fertility treatment.

How do I get there from here?: Taube’s research focuses on the neurobiological mechanisms underlying spatial cognition. “How do we know where we are? What direction are we facing? These abilities are fundamental processes in enabling us to navigate accurately in the world,” Taube says.

The brain’s compass: To pursue these questions, Taube’s laboratory uses electrophysiological recording techniques to record rats’ neurons while the rodents perform spatial tasks. “The grant studies a special type of spatial cell, referred to as a head direction cell, that fires when the animal points its head in a particular direction, like a compass,” Taube explains. “We are studying how the brain generates this spatial signal and how the animal uses this signal during navigation.”