Undue Influence, an original dance-theater work examining the impulse, incidence and implications of sexual assault in a college social environment, will be performed by the Dartmouth Dance Theater Ensemble (DDTE) on Friday and Saturday, May 20 and 21, at 8 p.m., and Sunday, May 22, at 2 p.m., in Moore Theater at the Hopkins Center for the Arts. 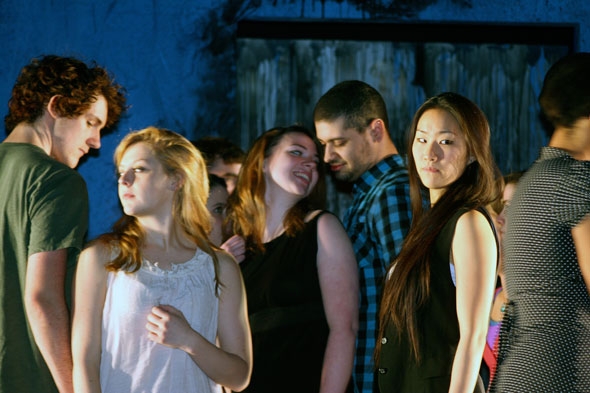 The Dartmouth Dance Theater Ensemble performs Undue Influence, an original dance-theater work about sexual assault in a college social environment, May 20 through 22. (photo courtsey of the Hopkins Center for the Arts)

Combining realistic and abstract danced vignettes involving fictional Dartmouth student characters created by and portrayed by the ensemble members, plus dialogue and projected text, the work brings to life what the students see as the lack of intimacy, objectification of the body, and abuse of one person’s power over another—physical or social—that they feel permeate male-female relations in Dartmouth’s social scene, said Department of Theater chair Peter Hackett, one of the work’s faculty advisors. The program contains adult language and themes.

“Theater is a place where the community can come together to discuss and debate critical issues of the time,” said Hackett. “In some respects this is one of the most pressing issues that Dartmouth is facing, as is true across college campuses and American culture in general. The only way to address it is to speak about it honestly. I think this project says a lot about the importance of the arts at Dartmouth and the efficacy of theater in addressing the issues of the day. I also think it says a lot about the 19 students in DDTE. Their story is very truthful and heartfelt and, as with all art that deals with difficult issues, it takes tremendous courage to present.”

Ensemble members have invested hours of rehearsal, up to seven days a week, since September. “I hope this show takes the conversation about sexual assault outside of the circles now discussing it and onto the general campus,” said Roni Nitecki ’11, one of the student choreographers. “I hope it will serve as a mirror to students’ behavior as young people who sometimes don’t respect each other.”

“I’m most hoping that people will walk away with the idea that they should question the choices they are making on Friday or Saturday—or any other day of the week—and look at the core of those choices,” said Suzanne Kelson ’12, another choreographer. “Perhaps it will help them think about the example they are setting, how their behavior affects not only themselves and other individuals but also the culture.”

The idea for the project came from students in the ensemble, says DDTE Director Ford Evans, the director and choreographer. “Through working on Viscera [the DDTE’s spring 2010 show which was an unsparing look at the causes and costs of war], the students learned they could create and participate in a project that has immediate relevance to our lives. The entire dance cast of Viscera got behind the idea. The students pitched it to the [theater department] faculty and won our support.”

Said Kelson, “It seemed to be so relevant to all our lives, and people were so excited about the issue, in a good way, really wanting to bring about change.”

-- Hopkins Center for the Arts