Listen to the podcast with Addie Gorlin ’11 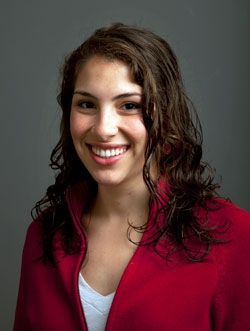 Adeline “Addie” Gorlin ’11 spent much of this past year traveling back and forth to her native Minneapolis (and St. Paul), Minn., as she researched and conducted interviews for her Senior Fellowship project, a play titled, 88 Voices…Now We Can Have a Conversation (Formerly Known as Talking to a Chimookoman). Written in the investigative theater style, the play, Gorlin says, “is a compilation of 88 conversations conducted with people of both Native and non-Native descent in the Twin Cities. Their words have been kept verbatim and rearranged into a theatrical production exploring the perceptions and realities of American Indian individuals and communities today.” The play, which Gorlin is also producing and directing, will be performed by a cast of 13 students on May 25 and May 26 in Silsby Room 028 at 7 p.m.

Senior Fellowships were established in 1929 by President Ernest Martin Hopkins as a program for seniors to work independently on a project of their own design. Fellows are not required to enroll in courses during their senior year and are not required to complete a major. The Paul Room in Baker Library is reserved for the use of Senior Fellows, as it has been since 1939. The program is funded by a generous endowment from the Kaminsky Family Fund (Gerald Kaminsky ’61 was a Senior Fellow). Past Senior Fellows also include Nelson Rockefeller ’30, the 41st U.S. Vice President and former Governor of New York, and Peter Tse ’84, associate professor of psychological and brain sciences.

Dartmouth Now will be featuring a podcast interview with one Senior Fellow a week leading up to Commencement on June 12.
Written by
Bonnie Barber
Share this
FacebookTwitterEmail
Quoted
Quote