Professor of French and Comparative Literature Lynn Higgins will present the 23rd Presidential Lecture on Tuesday, May 17, at 5 p.m., in 105 Dartmouth Hall. Higgins’s lecture, entitled “The Powers of Fiction,” will deal with her work on the legacy of World War II France, including the German occupation, in literature and film as well as her forthcoming book about filmmaker Bertrand Tavernier. 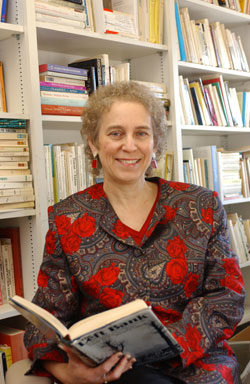 Professor of French and Comparative Literature Lynn Higgins will deliver a lecture entitled “The Powers of Fiction” on May 17th in 105 Dartmouth Hall at 5 p.m. (photo by Joseph Mehling ’69

“I’ve been hearing echoes across the divide between my two topics for some time, and this lecture has been an opportunity to get the two subjects to talk to each other,” says Higgins, who joined the Dartmouth faculty in 1976. “I’m hoping that I’ll be able to explore some questions coming from the humanities that will be of value and interest to my colleagues and students in literature, and also to those working in fields very different from mine.”

The Presidential Lecture Series was established in the fall of 1987, and honors the contributions of outstanding members of the Dartmouth faculty. “I am proud to continue this tradition,” said President Jim Yong Kim. “It is a wonderful way to honor excellence in scholarship and to bring together the Dartmouth community in an informative, informal setting.”

Higgins holds the Israel Evans Professorship in Oratory and Belles Lettres and serves as chair of the Department of French and Italian. Her lecture is free and open to the public, and will be followed by a reception in Rauner Library.