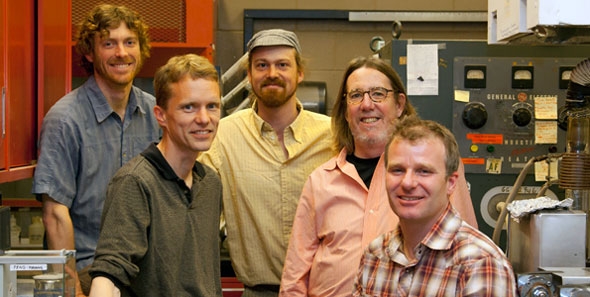 The group routinely measures beryllium-7 (Be-7), a natural radionuclide they use as a tool to study sediment and contaminant transport, using a gamma spectrometer. Gamma spectroscopy allows the measurement of unique gamma rays emitted by chemical elements present in soil, streams and precipitation. It enables researchers to see the entire gamma ray spectrum including other natural or man-made sources of radiation.

In samples collected the week of March 18, 2011, the lab found radioactive iodine-131 (I-131) in precipitation samples collected from Shattuck Observatory. This form of iodine is not a naturally occurring radiation source. According to Landis, I-131 would never be found in New Hampshire except as a result of a nuclear disaster or bomb. The timing of their findings points toward the incidents at Fukushima Daiichi, and is consistent with findings elsewhere in the U.S.

“I-131 is uniquely a fission product, produced in nuclear reactors,” says Landis. “While also present in nuclear waste, it decays with a half-life of eight days and thus is virtually eliminated after a few months of storage time. Presence of I-131 is thus diagnostic of ‘criticality’ of a reactor.” A half-life refers to the period of time it takes for a decaying substance to decrease by half.

Fortunately, the team has not yet found evidence of cesium- 137 (Cs- 137), a particularly harmful product of nuclear fission with a half-life of 30 years. Cs-137 contamination has been a major cause for concern in Japan following the Fukushima crisis. It can easily contaminate food and water, and concentrates in tissue and bones if it enters the human body.

Finding I-131 but no Cs-137 is explained by the two isotopes’ distinguishing characteristics. “Iodine forms a number of volatile compounds. It was released in steam explosions at the Fukushima Daiichi reactors and, consequently, injected directly into the atmosphere. Cs-137, on the other hand, is gaseous only at very high temperatures, and travels long distances in association with dust particles,” says Landis. “I suspect this is why we have not seen measurable contamination here in Hanover: the transport distance is too great, and the cesium is falling out over the Pacific and, perhaps, the western U.S. before arriving in New England.”

So, what does this mean for residents of Hanover?

Landis says, “The amount is very small, but because iodine is efficiently absorbed by the human body or by vegetation as a micronutrient, there is certainly some minor risk.“ To put that in context, he explains, “In the unlikely event that someone ingested or inhaled all of the radioiodine deposited on a square meter of a Hanover lawn, the exposure would be a fraction of that received from a single chest x-ray or from cosmic radiation during a cross-country round-trip airplane flight.”

Furthermore, though I-131 deposition in Hanover has persisted in the month following the disaster, levels are diminishing rapidly.  The remainder will decay in the next two to three months, predicts Landis.

The group’s research is advised by Professors Carl Renshaw and W. Brian Dade in earth sciences and Professor Frank Magilligan in geography.