The Dartmouth Institute for Writing and Rhetoric hosted the Benjamin F. Barge and Class of 1866 Prizes for Oratory speech contest on Thursday, May 19.  The contest featured persuasive speeches by six finalists on the topics of their choosing. Associate Professor of Theater Jamie Horton, lawyer and previous Barge Prize winner Paul B. Klaas ’74, and the Honorable Mary Miles Teachout of the Vermont Superior Court served as judges. 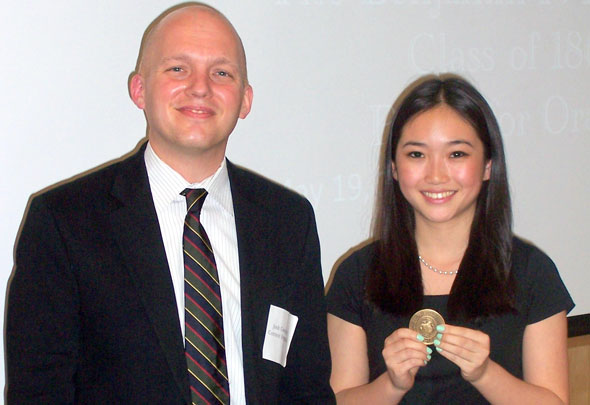 Michelle Luo ’11 was awarded the Benjamin F. Barge Prize for Oratory, which is presented to a member of the senior class judged to “write and pronounce in public an English oration in the best manner.” Luo, an anthropology major from Long Island, presented “Facebook Privacy,” an appeal for Facebook users to consider their privacy more seriously.

“The reality is that we have very little control over who can access our personal information and what they can do with it,” says Luo, who will attend Columbia Law School next year.  “The scariest part is that there are no laws that protect our privacy on Facebook, and the case law shows that the prevailing opinion of most judges is that Facebook privacy doesn’t and shouldn’t exist.”

Laura Kier ’12 and Christopher Rhoades ’13 were awarded the Class of 1866 Prizes for Oratory, which are presented to one junior and one sophomore for “excellence in original orations.” Kier, an engineering and environmental policy major from New York City, presented “A Tradition of Change: Coeducation at Dartmouth,” an examination of Dartmouth’s evolution as a coed institution. Rhoades, an engineering major and Japanese minor from Dallas, presented “Energy Drinks and Alcohol: A Risky Combination,” in which he argued against the consumption of the energy drinks together with alcohol, citing statistics as to the dangers of the mixture.

The speech contest has a long history at Dartmouth; the Benjamin F. Barge Prize for Oratory was established in 1901, and the Class of 1866 Prizes for Oratory were established in 1905. The 2011 finalists are pictured above. From left: Christopher Rhoades ’13, Ben Schifberg ’13, Michelle Luo ’11, Laura Kier ’12, Eliana Fishman ’11, and Zoe Friedland ’12. (photo courtesy of the Institute of Writing and Rhetoric)

“Speech at its best is an exciting, informative dialogue, and I think this year’s contest was a good representation of that,” said Josh Compton, senior lecturer in speech and organizer of the Speech Contest.  “The contest represents how we’re approaching speech at Dartmouth—a dynamic dialogue reflecting thoughtful inquiry, intellectual analysis, and listener considerations.”

More information about the contest is available on the Institute for Writing and Rhetoric website.