Playing a sport isn’t really that important—and at the same time it can be one of the most significant activities in the life of a Dartmouth student, says Harry Sheehy A’55, director of athletics and recreation.

Sheehy reflected recently on the paradox that sports represent, what he hopes students get out of the experience, changes in the department, and his move from Williams College to Division I play at the Big Green. 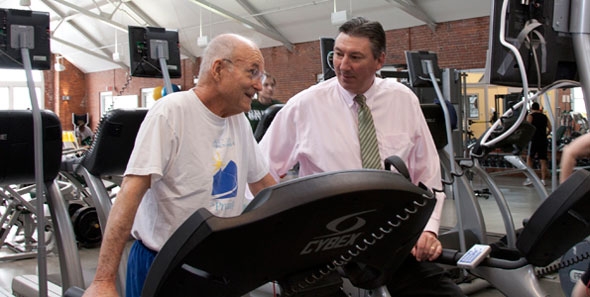 Director of Athletics and Recreation Harry Sheehy (right) talks with Henry Nachman ’51 in the Zimmerman Fitness Center. Since arriving at Dartmouth in September 2010, Sheehy has been working to build success in varsity sports, support for Dartmouth’s athletics programs, and a comprehensive approach to physical wellness and performance for athletes and non-athletes alike. (photo by Joseph Mehling ’69)

But first the sports conundrum: It’s not so much about the actual game, but what, in the end, students learn from it, Sheehy says.

“We want our athletics department and physical education classes and club teams to turn out really well-integrated individuals who can problem-solve effectively, who have stick-to-it-tiveness, who aren’t afraid to fail, and who exhibit courage and leadership. And if we have a part in constructing that in these students’ lives, then we’re succeeding,” says Sheehy.

After almost a year at the helm of athletics and recreation, Sheehy has had a powerful impact and is already improving the experience for Dartmouth’s student-athletes, says Bob Ceplikas ’78, deputy director of athletics.

“Harry has brought an incredible energy level to our department and has inspired the entire staff to raise the bar,” observes Ceplikas. “The combination of President Jim Yong Kim and Harry Sheehy is very powerful. They are both dynamic, inspirational leaders who identify personally with the value of athletics at an educational institution.”

“President Kim said, ‘Bring me big ideas and data,’ ” recalls Sheehy. “At Dartmouth, we have been thinking in similar ways for a long time, and I’m challenging that. In terms of athletics, what can we really be? Where can we go? How can we stretch?”

As a way to begin answering those questions, Sheehy is working on a number of new initiatives, including a program to help students achieve peak performance in athletics and beyond. The program will offer students a menu of assistance with nutrition, sports medicine, strength training, and sports psychology. While those individual services currently exist at Dartmouth, the initiative will be among the first in the nation to integrate them into what Sheehy says will be a “cutting-edge program.”

He expects the peak performance program to debut this fall, with a new coordinator hired to begin bringing  it together. The assistance will first be offered to varsity athletes. Then, as it is refined, the program will later be available to all students involved in sports and recreation.

Sheehy is reviewing physical education classes to examine what more Dartmouth could offer and investigating ways to create an improved sense of physical wellness on campus. For example, there may be opportunities to expand hours facilities are open or offer instruction in how to use athletic equipment to encourage participation by students not now taking part in varsity or club sports.

The growth in intramural and club sports—the latter having doubled the numbers of teams offered in recent years—has Sheehy looking at what impact increased participation has had on facilities and the need for coaching assistance.

He’s also raised the bar for fundraising, aiming to endow $20 million in coaching positions and bring in an additional $1 million annually—to reach a yearly total of $3.5 million—in support from Friends groups in a number of sports. These gifts would help support Sheehy’s mission to achieve a higher level of excellence in Dartmouth athletic programs.

“We have very good momentum right now,” Sheehy says of support from alumni.

One alumnus who has noticed the change in Dartmouth athletics is Byron Anderson ’76, president of the Friends of Football. Anderson and others had been working to revitalize the football Friends group, raising money and planning events when Sheehy came to Dartmouth. He says Sheehy is “very much in line” with the group’s plan to step up fundraising and support for football.

“Harry’s been very supportive of us running this like a business, having defined objectives and measuring results,” Anderson says of the Friends organization.

He adds that alumni also appreciate the high standards Sheehy has set to produce winning teams.

“Harry’s not a guy who’s afraid to make decisions. He’s a great guy, but he’s also a hard-nosed demanding person, which is what you need if you are going to get to be the best in the league,” Anderson notes. 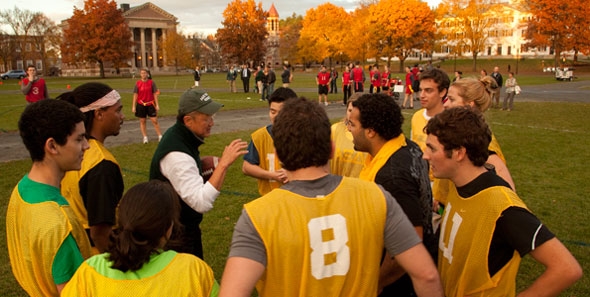 Also new at Dartmouth is an Athletics Advisory Board, whose alumni  members have been charged with bringing the College new, bold ideas. The board met for the first time this spring.

The energy Sheehy has brought to Dartmouth hasn’t gone unnoticed by athletes, says Shannie MacKenzie ’11, a lacrosse player from Greenwich, Conn. “Although the Dartmouth community has always supported student-athletes during my time here, the overall support from the community has increased in the past year,” she says.

Coaches, too, have felt a change since Sheehy’s arrival.

“He has made a difference in his short time at Dartmouth,” according to women’s basketball coach Chris Wielgus. “He’s very much coaching all of us.

“Everybody here is very excited with his energy, and he clearly has a vision and is going to work with everyone to get it done. He has no mediocrity in him, and he doesn’t expect it in us, and that’s very exciting—to have someone who believes in you,” Wielgus added.

Sheehy is also popular outside of the gym, ranking among the most requested speakers by alumni groups, says Patsy Fisher ’81, director of class and club activities, who spent much of this year as acting vice president for Alumni Relations.

“He has made a great impression. He is such a natural at public speaking and so passionate about his work with student athletes that his enthusiasm is infectious. It’s not surprising that he is much in demand for alumni speaking engagements,” says Fisher.

The job has also brought new life to Sheehy’s own game, says the former championship basketball coach who at Williams compiled the fourth-best winning percentage in the history of Division III men’s basketball and then went on to lead the school’s athletics department to 10 Division III Director’s Cups in 10 years.

“When I left Williams, I thought I had worked pretty hard. But I learned that there was still another challenge out there for me,” Sheehy says. “And I think that I have fallen in love again with this job.”

Although he’s no longer coaching a team, Sheehy hasn’t lost his competitive edge. Along with President Kim, Sheehy has set his sights on bringing home as many championship titles as possible. With this spring’s Ivy League championships in women’s tennis and women’s lacrosse in hand, as well as a divisional championship for baseball, Dartmouth is on its way.

“Let’s stand toe-to-toe with Harvard, Yale, and Princeton and throw a punch and see where we land. If we get knocked down, we’ll get up again,” Sheehy says.