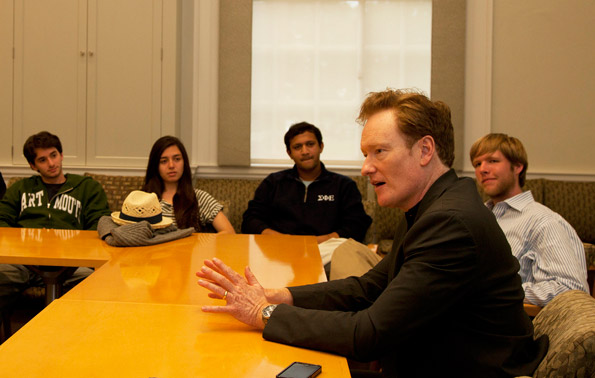 Conan O’Brien met with students in the Dartmouth Center for the Advancement of Learning to deliver lessons about comedy and the entertainment business (photo by Joseph Mehling ’69).

Dartmouth undergraduates hoping for careers in comedy got some serious–and funny–advice from late-night comedian Conan O’Brien, who talked with members of campus humor groups about how he broke into the business.

It took a few minutes for students to loosen up with O’Brien, who will deliver the Commencement address on Sunday, June 12, 2011. He arrived in town a day early and met with 18 students in the Dartmouth Center for the Advancement of Learning conference room, in Baker Library.

“Nothing says comedy like a conference room,” he jokes, urging students to sit closer around a big table.

O’Brien told students from the Dartmouth Jack-O-Lantern humor magazine, and the Dog Day Players, Casual Thursday and Sit-Down Tragedy improve groups not to try and sell themselves as funny in letters or emails seeking a job. Interns who have worked with him and now have successful careers—including John Krasinski of The Office—have made it because of their good work, he says.

“All of the ones who are successful, to a one, never tried to make me laugh in the elevator. Let your work speak for itself. You’re not going to start as a writer. You’re going to start getting someone coffee. Do your job. Be professional, watch, listen, and then do your work,” O’Brien says.

He told the students not to “let the fact that you have an Ivy League diploma” lead them to think it will be easier to break into the business. “Have some humility about it,” he cautions. 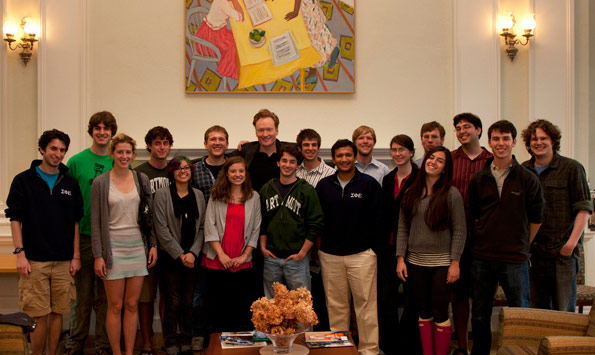 About finding his “voice” as a comedian, O’Brien says: “It’s all about finding out what your passion is. That’s what’s going to be funny. It’s what Johnny Carson told me—be yourself. Just be yourself. It’s the only rule that works.”

O’Brien made his way to the library after lunch at Murphy’s, and a quick visit to the Green to get a look at the Commencement stage setup.

A Harvard graduate, and Massachusetts native, this is O’Brien’s first trip to Dartmouth. “I would have come to Dartmouth if it was in Buenos Aires, or the Caribbean. When I was going to school, if you had a chance to get away, you didn’t head north,” he jokes.

He read a bit of his speech—in a mock John F. Kennedy voice—waved to visitors who caught sight of him, and posed for photos with several, including Julia Lynch ’11, who stopped by with her father, New Hampshire Governor John Lynch, an ex officio member of Dartmouth’s Board of Trustees.

O’Brien posed for a photo with Julia Lynch, as her father fumbled with her pink iPhone, warning that he had never taken a picture with a phone. “You are a governor, though, aren’t you?” O’Brien jokes.

Some on campus had speculated that because O’Brien’s parents will be in the front row for his Commencement address, he might tone down his comedy. But that couldn’t be further from the truth, O’Brien laughs.

“My parents bring out the worst in me. I regress around my parents, and that’s what you can expect tomorrow,” he says.

Watch video of Conan rehearsing for his Commencement address in the video below. 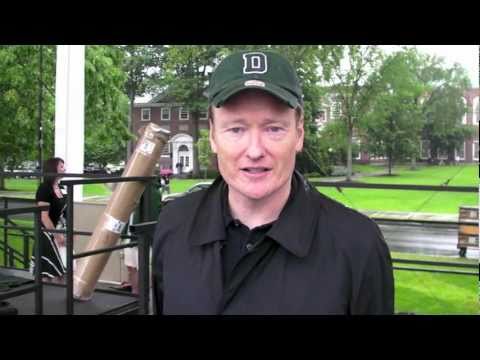