Dartmouth College awarded 1,782 degrees at its annual Commencement exercises on June 12, 2012. On a chilly day under threatening skies, an audience of more than 12,000 family and friends watched as nine honorary degrees were also conferred, including doctor of laws to former President George H.W. Bush, on his 87th birthday. The honor included an impromptu singing of “Happy Birthday” to President Bush from the audience.

“You command our gratitude not only for your accomplishments, but also for your example: love of country, devotion to family, integrity, and selflessness. In the magnificent life of the 41st President of the United States of America, Dartmouth will forever join all Americans in finding a source of inspiration and courage,” Dartmouth President Jim Yong Kim told President Bush.

O’Brien’s speech was a mix of humor—“it is great to be here in New Hampshire, where I am getting an honorary degree and all the legal fireworks I can fit in the trunk of my car”—and wisdom. He drew advice for the graduates from the experience of losing his role as host of The Tonight Show in January 2010. He subsequently returned to television with a new show, Conan on the TBS network in April of this year. 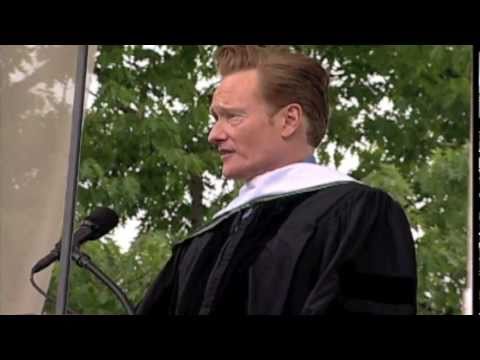 “It is our failure to become our perceived ideal that ultimately defines us and makes us unique. It’s not easy, but if you accept your misfortune and handle it right, your perceived failure can become a catalyst for profound re-invention,” says O’Brien. “Through disappointment you can gain clarity, and with clarity comes conviction and true originality.”

The three-hour ceremony was broadcast live on YouTube, one of only two college commencements nationwide shown live on YouTube’s expanded live-streaming platform. The other broadcast was of Stanford University’s ceremony, later in the day.

Dartmouth awarded bachelors, masters and doctoral degrees from its undergraduate and graduate arts and sciences programs, Dartmouth Medical School, Thayer School of Engineering, and the Tuck School of Business.

Kim, in his Valedictory address to seniors, said: “Your liberal arts education will have an enduring impact on each one of you and the world you occupy. What you have accomplished here at Dartmouth, individually and as part of our community, will enrich your lives and empower you to make the world a better place.”

“At Dartmouth, we’ve built connections,” Halpern said. “I am grateful for these connections and these tools. I hope you’ve built connections worth maintaining.” Said Heywood, “One truth I’ve found in community is that any honor granted here also goes to our friends, our families, our professors, our staff.”

The Commencement ceremony capped a weekend of festivities on campus that included the Baccalaureate multifaith service for graduates and their guests, which featured an address by environmentalist Bill McKibben, and a speech at the Tuck School of Business Investiture Ceremony by Jeffrey Immelt ’78, CEO and chairman of GE, and a member of the Dartmouth Board of Trustees.

Members of the Class of 1961, who are celebrating their 50th reunion, were recognized by President Kim during Commencement. The returning classmates marched into the ceremony before students, to extended applause from the audience.

Their reunion celebration on campus includes a visit from guest of honor Thad Seymour who was Dartmouth’s dean of students from 1959 to 1969. Seymour, who lives in Lake Mary, Fla., is president emeritus of Rollins College.

Also celebrating a 50-year anniversary was trumpeter Roger Murtha of Hartford, Conn., who has played at every Dartmouth graduation since 1961. Murtha plays with a brass quintet from The Hartt School at the University of Hartford.