Dartmouth College has received as a donation the papers of Donella “Dana” Meadows, late professor emeritus of environmental studies. The Donella Meadows Archive will include personal papers, journals, and a variety of materials related to her teaching, research, and accomplishments. The papers are a gift of the Sustainability Institute, which Meadows formed in 1996. 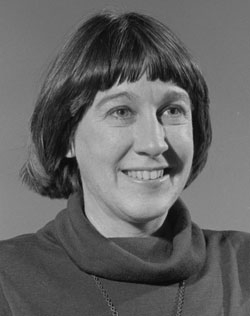 Environmentalist Donella “Dana” Meadows was a professor at Dartmouth from 1972 until her death in 2001. Her papers have been donated to Dartmouth by the Sustainability Institute. (photo courtesy of Rauner Special Collections library)

A leading scholar, researcher, and environmentalist, Meadows was a professor at Dartmouth for 29 years, beginning in 1972. She resigned her full-time professorship in 1983 to devote more time to international activities and writing but remained an adjunct professor, teaching courses in environmental journalism and environmental ethics until she died in 2001.

Meadows co-authored The Limits to Growth, which sold over 9 million copies in 28 languages following its publication in 1972. The book reported on a study of long-term global trends in population, economics, and the environment and began a debate about the limits of the Earth’s capacity to support human economic expansion. Twenty-one years later, she co-authored its follow-up, Beyond the Limits.

Meadows wrote a weekly newspaper column, The Global Citizen, published in more than 20 papers nationwide. She received the Walter C. Paine Science Education Award in 1990 and was nominated for a Pulitzer Prize in 1991 for the column. Selected pieces were published in 1991 as a book, also called The Global Citizen.

In 1982, she and her former husband, Dennis Meadows, founded the Balaton Group, a global coalition of systems-oriented analysts and activists from 50 nations in 1982. As the group’s coordinator for 18 years, she facilitated a process of information sharing and collaboration among hundreds of leading academics, researchers, and activists in the sustainability movement.

“Dana Meadows’ great legacy lives on very clearly in the hearts, minds and teaching of the Dartmouth community. In many ways her gentle touch has guided the development of the field and practice of sustainability,” says Rosi Kerr ’97, Dartmouth’s director of sustainability. “Having her work here at the College will strengthen that connection as we help lead the world to a sustainable future.”

For 29 years, Meadows resided in New Hampshire and Vermont, where she established headquarters for the Sustainability Institute and worked with others to build the Cobb Hill Co-Housing Community and Cedar Mountain Farm, both in Hartland, Vt.

The Donella Meadows Archive will be housed in the Rauner Special Collections Library, which holds the College’s rare book, manuscript, and archival collections including materials related to eminent alumni, faculty, and others associated with the College.