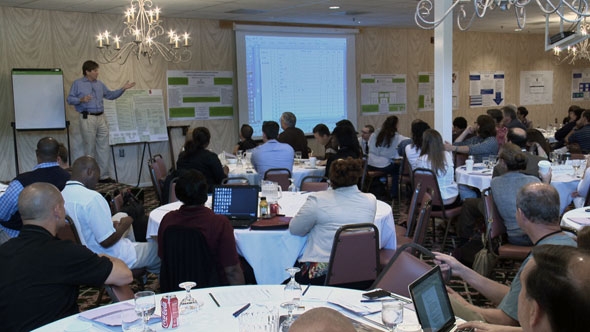 Lloyd Provost, a world-renowned expert in the science of improvement and senior fellow of the Institute of Healthcare Improvement, talks with college and university team members at a working session of the Learning Collaborative on High-Risk Drinking on July 1, 2011 at Lake Morey Resort in Fairlee, Vt. (Photo: Courtesy of Dartmouth Media Production Group)

The Learning Collaborative on High-Risk Drinking has reached full membership as college and university teams from around the country prepare for the group’s first learning session, to take place from June 29 to July 1, 2011. Teams from 32 schools—18 of which joined the group following its May 2 launch—will begin 18 months of work together to reduce the amount of binge drinking and the harm it causes on their campuses.

“We’re excited about getting started on this important work,” said Dartmouth President Jim Yong Kim, a leader in the effort and also a public health physician. “Interest in the Collaborative among leaders in higher education and the widespread attention this project has received indicate a strong desire to work together on this difficult issue.”

Collaborative members represent large and small schools from a variety of settings in all regions of the country and include nine public universities, five Ivy League institutions, and more than a dozen private colleges. 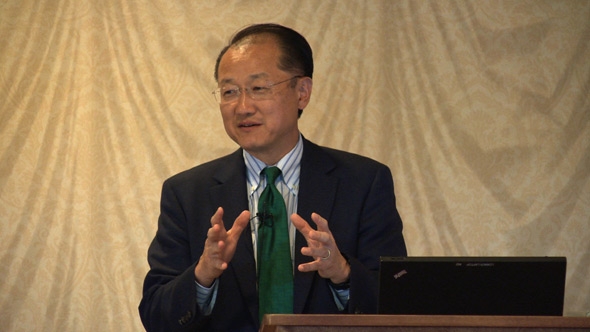 Dartmouth College President Jim Yong Kim delivers opening remarks to college and university teams from around the country at the inaugural session of the Learning Collaborative on High-Risk Drinking on June 29, 2011, at Lake Morey Resort in Fairlee, Vt. Kim, who is also a public health physician, told participants: “Binge drinking is a public health problem and we need a public health solution.” (Photo: Courtesy of Dartmouth Media Production Group)

The Collaborative members are:

(Schools listed in italic were members when the Collaborative was announced on May 2, 2011):

Nearly 40 percent of college students engage in binge drinking, a number that has been virtually unchanged for decades. In addition, alcohol-related injuries each year claim the lives of close to 2,000 college students in the United States, while an estimated 600,000 more are injured while under the influence, according to figures from the National Institute on Alcohol Abuse and Alcoholism. Research has also shown that high-risk drinking often leads to sexual abuse, unsafe sex, and academic problems.

U.S. Health and Human Services Secretary Kathleen Sebelius has called the Dartmouth-run Collaborative “a promising initiative” and said her agency looks forward to partnering with college leadership on the effort.

Together, Collaborative teams from each school will use comprehensive evaluation and measurement techniques to identify and implement the most effective ways to confront binge drinking and lessen the harm it causes. The second and third Collaborative sessions will be held in January 2012 and July 2012.