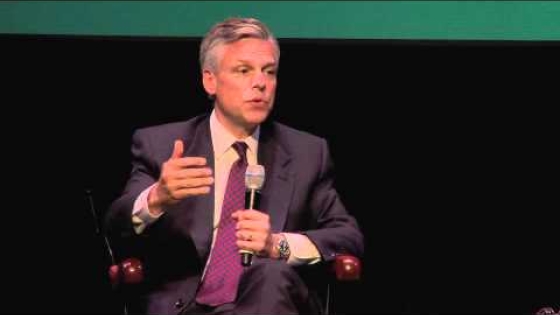 Remote video URL
Jon Huntsman Jr. has extensive foreign policy experience, a passion that was sparked at a young age. When he was 19, Huntsman embarked on a two-year Mormon mission trip to Taiwan, where he learned to speak Mandarin Chinese and Taiwanese Hokkein.

He entered public service in 1983 as a member of the Reagan Administration where he served as a staff assistant to the president.

He was named U.S. Ambassador to Singapore in 1992 under President George H.W. Bush, becoming the youngest head of an American diplomatic mission in a century. As Deputy U.S. Trade Representative under President George W. Bush, in 2001 to 2003, he helped negotiate dozens of free trade agreements with Asian and African nations.

Huntsman served as Utah’s governor from 2005 to 2009, a job he left in 2009 when President Barack Obama tapped him to be U.S. Ambassador to China. He was unanimously confirmed for the post by the Senate.

During Huntsman’s tenure as governor, the Pew Center graded Utah as the best-managed state in the nation.

Shortly after becoming governor, Huntsman implemented a plan for jumpstarting Utah’s economy, including historic tax reform. He simplified the tax structure and cut taxes by more than $400 million, the largest tax cut in the state’s history.

Huntsman resigned as Ambassador in April of 2011, after suggesting earlier in the year that he might be interested in running for the presidency. He announced his bid for the presidency on Tuesday, June 21, at the Statue of Liberty, at Liberty State Park in New Jersey.

In the private sector, Huntsman has been a businessman, serving in a number of executive positions in Huntsman Corporation, a chemical company which his family owns.

He is a founding director of the Pacific Council on International Policy and has served on various boards such as the Brookings Institute Asia Policy Board, the Center for Strategic and International Studies Pacific Forum, the Asia Society in New York and the National Bureau of Asian Research.

Huntsman has a BA from the University of Pennsylvania, as well as several honorary degrees.