Michael R. Taylor, the Muriel and Philip Berman Curator of Modern Art at the Philadelphia Museum of Art, has been named the director of the Hood Museum of Art at Dartmouth. Taylor succeeds Brian Kennedy, who served as director for five years before assuming the directorship of the Toledo Museum of Art in September 2010. Taylor begins his position at the Hood on August 15. 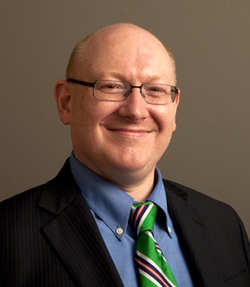 Michael R. Taylor brings expertise on modern and contemporary art to his new role as director of the Hood Museum of Art at Dartmouth. (photo by Joseph Mehling ’69)

A highly regarded curator, author, and expert on modern and contemporary art, Taylor is an eminent scholar of Dada and Surrealism with a focus on the art of Marcel Duchamp. Taylor’s 2009 book, Marcel Duchamp: Etant donnés, won the George Wittenborn Prize for outstanding scholarship in the field of art history, and was awarded first prize for best museum permanent collection catalogue by the American Association of Art Museum Curators. Taylor has also served as an adjunct professor of art history at the University of Pennsylvania since 2001.

“Michael impressed us with his eloquence, passion for art, deep knowledge of art history, and broad understanding of what it takes to run an academic museum like the Hood successfully,” said Provost Carol Folt. “He understands the vital role of the Hood in the life of the students, faculty, and entire community, and will be a tremendous asset to the Hood and Dartmouth.” Taylor will report to Folt.

“I’m honored and absolutely delighted to accept the director position at the Hood Museum,” said Taylor. “The museum’s impressive permanent collection and talented staff offer exciting possibilities. The Hood’s internationally recognized education program is important to me, since I love teaching and am thrilled to have the opportunity to work with the faculty at Dartmouth and, above all, to engage with the students. I look forward to moving the Hood in new and exciting directions, especially in terms of student-driven exhibitions, which I believe hold the key to the museum’s future success.”

“Michael is known worldwide for his expertise as a curator and his superlative scholarship,” said Search Committee Chair Katharine Conley, associate dean of the faculty for the arts and humanities. “But it was his enthusiasm for and understanding of the Hood collection that truly set him apart.”

In announcing Taylor’s appointment, Folt praised the leadership of Katherine Hart, the Hood’s associate director and the Barbara C. and Harvey P. Hood 1918 Curator of Academic Programming, who served as the museum’s interim director. Folt also thanked the search committee members for their thoughtful work. In addition to Conley and Hart, the members were: Jay Satterfield, special collections librarian; Jeffrey H. James, the Howard Gilman Director of the Hopkins Center for the Arts; the Rev. Preston “Pete” Kelsey II ’58, overseer of the Hood Museum of Art; Adrian Randolph, the Leon E. Williams Professor of Art History and director of the Leslie Center for the Humanities; Colleen Randall, professor of studio art; Jeremy Rutter, professor of classics and the Sherman Fairchild Professor of the Humanities; Deborah L. Nichols, the William J. Bryant 1925 Professor and acting chair of anthropology; and N. Bruce Duthu ’80, the Samson Occom Professor and chair of Native American studies.

“The Hood is an outstanding institution, with a strong commitment to scholarship and to the unique role that an art museum can play in enriching the creative life of the Dartmouth community,” said Timothy Rub, the George D. Widener Director and chief executive officer of the Philadelphia Museum of Art and director of the Hood from 1991 to 1999. “We will miss Michael dearly, but wish him well and are grateful for the many contributions he has made to this institution during the past 15 years. He is an exceptional curator and will be a great director.”

A native of London, England, Taylor received Master of Arts degrees from both the University of Edinburgh in Scotland, and the Courtauld Institute of Art in London. He also received his PhD at the Courtauld Institute. His recent exhibitions include “Paris Through the Window: Marc Chagall and His Circle” (2011); “Picasso and the Avant-Garde in Paris” (2010); “Marcel Duchamp: Etant donnés” (2009); “Arshile Gorky: A Retrospective” (2009); and “Salvador Dalí: The Centennial Retrospective” (2005).

The Hood Museum of Art, which celebrated its 25th anniversary in September 2010, is a teaching museum that cultivates learning through direct engagement with works of art for both academic and community audiences. This dynamic educational and cultural facility houses one of the oldest and largest college collections in the country, with more than 65,000 objects acquired since 1772. Among its most important works are six Assyrian stone reliefs that date from around 900 BCE. The collection also presents art from other ancient cultures, the Americas, Europe, Africa, Papua New Guinea, and many more regions of the world. As the only institution of its kind in the region, the Hood serves as a vital resource for the students, faculty, and staff of Dartmouth as well as the many communities of the Upper Connecticut River Valley of New Hampshire and Vermont.