“I’m a teacher by trade and a coach by title,” says Chris Wielgus, head coach of women’s basketball. Wielgus is one of Dartmouth’s 43 head coaches, of whom 31 coach varsity teams and 12 coach club teams. 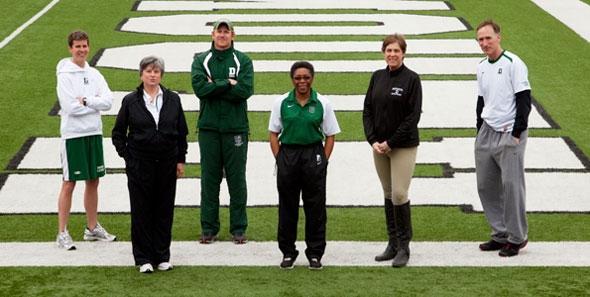 Wielgus and her head coaching peers all take seriously their role as mentors who teach far more than sports skills and strategy to their student-athletes. There are 1,039 students who play Dartmouth’s 34 varsity sports; 1,265 students participate in the College’s 35 club sports.

“Because of the amount of time my players and I spend together there are these little snippets of time where we can learn and grow together,” says Wielgus, who has guided her teams to 12 Ivy League titles. “A lot of what I say has to do with hard work. The single most important lesson and the greatest by-product of being on the team is that these kids learn how to work. Work used to be a survival skill, now it’s a learned skill. And they learn that they’re capable of working a lot harder than they ever thought they could.”

“One of biggest things I have taken from Coach G [Bob Gaudet ’81] is ‘Most everything you do is a process. It’s not going to happen today, tomorrow, or maybe even this month, but every day you need to make sure you are taking strides to get better. And after a while the process will reward you.’ ”

“One of the most important things Sally teaches us is to have a sense of humor about horse shows. In the IHSA (Intercollegiate Horse Show Association), we randomly draw the horses we ride in our events. While it is often frustrating to have poor results because of a bad draw, Sally teaches us to learn from the harder horses and to enjoy each experience for what it is.”

Kelly Tropin ’13, captain of the equestrian team, is a government major from New Canaan, Conn.

“Rugby at Dartmouth has forced me to confront my relationship with excuses and learn how to fail. Since, like many Dartmouth students, I generally experienced success before I came here, I always had an excuse at the ready when I did fail. I’ve learned to look at my failure, figure out how I got there in the first place, and take active steps toward improving, rather than trying to deflect my culpability.”

Tommy Brothers ’11, captain of the men’s rugby football club, will serve as student director of the Summer Experience at Dartmouth (SEAD) program this year. He will then begin work in Rwanda with Wyman Worldwide Health Partners and the Ministry of Health on the delivery of primary care in rural regions.

“It goes far beyond hockey,” says men’s hockey Head Coach Bob Gaudet ’81, who led this year’s team to the semifinals of the Eastern College Athletic Conference (ECAC) Men’s Hockey Championship. “In playing a team sport you learn about letting go of things for the good of the group and checking your ego at the door. Those are really important life lessons. But there’s nothing more important than work ethic. We have several players playing pro hockey now. That doesn’t just happen overnight. A lot of things can be accomplished with the right work ethic.”

While all of Dartmouth’s coaches stress the virtue of a strong work ethic, they also want their players to learn that hard work alone still may not yield the desired result. “We all teach our players to work hard but to also appreciate that hard work in itself can be a reward,” says women’s tennis Head Coach Bob Dallis, who holds a doctorate in sports psychology and counseling and guided the 2011 team to the program’s first-ever Ivy League title in April. “There are times when all the effort in the world is not going to get you in the line-up or get you that win.”

Adds Wielgus, “We open up at Kansas State next year and Georgetown is coming here. These teams are a lot better than we are. And it’s a really important lesson for these Ivy League kids to learn that you can work and work and still not beat Georgetown. But the bottom line is you learn to persevere. This is the lesson of athletics.”

Alex Magleby ’00, who has led the men’s rugby football club to seven Ivy League titles during his 10-year coaching tenure, echoes, “One thing we say all the time is ‘Don’t confuse effort with accomplishment.’ You can’t just try harder. You have to be smart and deliberate in how you do it, and you’ve got to adapt. And execution is still really important.”

Coaches also frequently stress projecting confidence, which equestrian Head Coach Sally Batton says is especially important in a subjective sport like riding. “I try to teach them to have confidence when they go in the ring, and that even if they have fear, don’t show it,” says Batton who is in her 20th year at Dartmouth and whose team won the 2010 Ivy League championship. “It’s important for them to have body language that says, ‘Look at me, I’m awesome!’ That’s something they can also take into other parts of their lives.”

Student-athletes frequently develop a strong bond with their coaches and often turn to them for advice beyond sports. Sandy Ford-Centonze, the Herb 1930 and Margaret Chase Head Coach for women’s cross country and track and field, says she discusses everything from “taking care of their bodies, roommate situations, partner issues, to weighing job offers.

“I have an open-door policy and stress that what’s said in here stays here. When it’s appropriate, I do recommend other campus resources that are available to them,” says Ford-Centonze, who has coached 10 indoor heptagonal champions and 21 outdoor heptagonal champions during her 19 years at Dartmouth. “I’ve gone to counseling sessions, to dean’s meetings, always at my athletes’ request. I’m their coach, but I’m also a surrogate parent.”

Ultimately, Dartmouth coaches strive to prepare their student-athletes to compete at the highest level of Division I athletics, while also preparing them for their post-Dartmouth careers.

“Athletics prepares them for life in so many ways as far as promoting teamwork, selflessness, working hard, and discipline, all those valuable things that will help them in the workforce and in the real world,” says women’s lacrosse Head Coach Amy Patton, whose team won its ninth Ivy League championship in April. Over the years her teams have made four NCAA Final Four appearances. “But what I really enjoy the most about coaching is watching them come in as first-year students and then seeing the young women they are when they graduate and how confident they’ve become through athletics. I think that’s one of the brightest spots in coaching.”