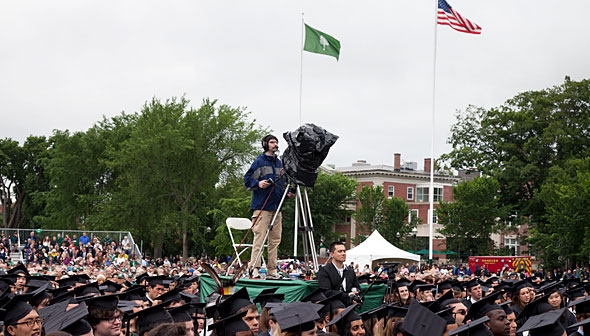 Dan Maxell Crosby ’02 (on platform), a producer and videographer with the Dartmouth Media Production Group, helps broadcast the 2011 Commencement ceremony from the Green.

On the job: As a producer and videographer with the Dartmouth Media Production Group, Maxell Crosby records and produces video and short-form documentaries about a wide range of campus people, organizations, and events. This week, Crosby and his co-workers have been especially busy shooting graduation events at Dartmouth Medical School, Thayer School of Engineering, and the Tuck School of Business, as well as Baccalaureate and the Commencement ceremony itself, on Sunday, June 12, 2011. That ceremony is broadcast live, including directly to a JumboTron on the Green. “It’s the biggest production event we have the whole year,” says Maxell Crosby.

On campus: Working at Dartmouth has led Maxell Crosby to take part in the kinds of lectures and events he overlooked as a student. He is very active in the Dartmouth Film Society, where he has had several film series proposals chosen for production. He also serves with Terry Osborne, senior lecturer in English and environmental studies, as co-advisor of Amarna Undergraduate Society, of which he was a member as student. As an alumnus, he says, “I’m really impressed with the energy and passion of the students, and I’m really excited by the energy President Kim brings.” While he welcomes change, Maxell Crosby hopes some aspects of Dartmouth will remain the same. “The Dartmouth community is something that hits you right away. There are bonds that form immediately,” he says. “That’s what I love about my job—the relationships and working with people.”

At home: Maxell Crosby, who majored in film and television studies and minored in economics, is married to Sarah Maxell Crosby ’04, an art history major. Now a writer in the Office of the President, she’s also been busy with Commencement, composing citations and introductions for honorary degree recipients. The two met at Dartmouth, although both hail from Maine. “Our parents live off the same road, only 45 minutes apart,” he says. “It makes visiting home very easy.” The pair live with their 16-month-old son in Lebanon and cite the films and live performances at the Hopkins Center as among their favorite pastimes.

Do you have a colleague you’d like to see recognized with a Staff Snapshot? Send your suggestions to dartmouth.now@dartmouth.edu.