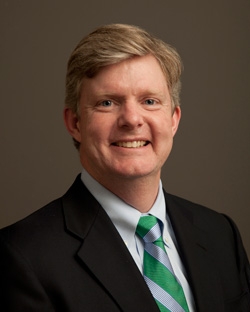 As Dartmouth’s vice president for Development, Tom Herbert will oversee fundraising efforts for the College and provide support to those of the professional schools. (photo by Joseph Mehling ’69)

“Tom has proven himself a critical member of Dartmouth’s Development team,” said President Jim Yong Kim. “With his history of accomplishment and clear understanding of Dartmouth’s distinctions and ambitions, he is poised to lead the fundraising efforts that will support our strategic priorities in the years to come.”

The vice president for Development oversees the fundraising efforts for the College and provides support to those of the professional schools. In this role, Herbert will succeed Carolyn Pelzel, who was appointed senior vice president for Advancement in April 2010.

“Tom is a proven leader who knows what it takes to grow and sustain a dynamic fundraising organization,” said Pelzel. “He represents Dartmouth exceedingly well in his work with donors and understands what it takes to earn their trust and investment. He will be a superb partner for all of us as we seek to further strengthen our educational programs and support the scholarly work of the faculty.” Herbert will report to Pelzel.

Herbert began his development career as a gift planning officer at Drake University in Des Moines, Iowa. From there, he moved to the Indiana University (IU) Foundation, where he became director of planned giving services and was later promoted to executive director of Development and Alumni Programs at the University’s College of Arts and Sciences. He then accepted the role of assistant vice president at the University of Michigan, where he led the gift planning department and served as a member of the senior staff directing the $2.5 billion “Michigan Difference” campaign. He also conceptualized and directed the first institution-wide faculty and staff campaign.

Herbert returned to the IU Foundation in 2006 as vice president of University-wide Programs. In that role, he constructed and oversaw the principal gifts program, spearheaded fundraising for the university’s life sciences initiative, and led the IU Bloomington campus through many of the final stages of its $1.1 billion “Matching the Promise” campaign.

In 2010, he joined Dartmouth as associate vice president for Development. He has been responsible for the College’s leadership giving team that works with individual major donors, the gift planning office, and foundation and corporate relations, as well as supporting many of the fundraising programs across the institution.

Professor of Biological Sciences Mary Lou Guerinot, who chaired the search committee, praised Herbert for his commitment to Dartmouth’s learning environment. “Tom’s vision for the Development enterprise is firmly grounded in his understanding of, and dedication to, our academic priorities,” said Guerinot.  Other members of the search committee were Patsy Fisher ’81, acting vice president for Alumni Relations; Joseph Helble, dean of Thayer School of Engineering; Brian Lally, chief advancement officer for Dartmouth Medical School and Dartmouth-Hitchcock Medical Center; and Michael Mastanduno, dean of the Faculty of Arts and Sciences.

“The opportunity to serve Dartmouth in this capacity, and at this particular time in its history, is incredibly special,” said Herbert. “It is a great privilege to work with President Kim, Senior Vice President Pelzel, and the Advancement staff as we move forward toward Dartmouth’s exciting next chapter as one of the great institutions of the world.”

Herbert earned his undergraduate degree in history from Northwestern University and his JD degree, with honors, from the Illinois Institute of Technology Chicago-Kent College of Law. He has co-authored a textbook on major and planned giving programs and is a frequent presenter at fundraising conferences around the country. He lives in Hanover with his wife Kirsten and sons Zachary and Ethan.