In the pre-dawn light on Thursday, July 21, Space Shuttle Atlantis is scheduled to land at the Kennedy Space Center in Cape Canaveral, Fla., returning to Earth after 13 days in space. When it comes to a halt on the tarmac, so too does the nation’s space shuttle program. Atlantis is on the final flight of the shuttle program, having spent its last two weeks carrying a four-person crew and a cargo of supplies and spare parts to the International Space Station. 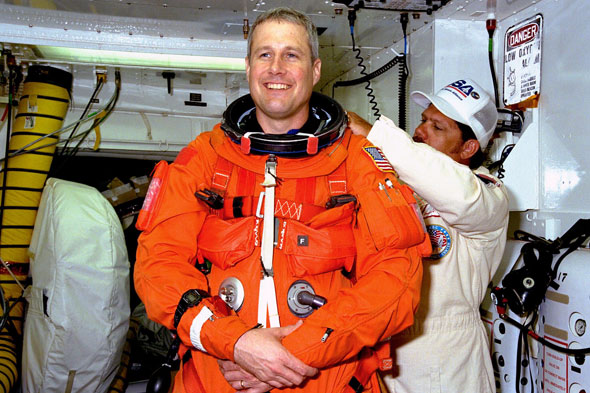 Dartmouth Medical School Professor Jay C. Buckey, who was a payload specialist astronaut on the STS-90, Neurolab Mission in 1998, is seen here suiting up for space flight. Even though he’d worn the suit in training, it “was a memorable day” when he put it on for launch. (photo courtesy of NASA)

Much has been said about what’s next for NASA. For Jay C. Buckey, who was a payload specialist astronaut on the STS-90, Neurolab Mission in 1998, he remains optimistic that NASA will continue to be the inspirational force it’s been from the time he was a young boy watching the moon landings.

Now a professor of medicine at Dartmouth Medical School and an adjunct professor at Thayer School of Engineering, Buckey was one of the thousands who made the pilgrimage to Florida to watch American ingenuity and imagination take flight one last time.

Many children say they want to be an astronaut when they grow up but you actually did become one. How did you accomplish that? Did you have help?

I was very interested in space as a boy (that was the time of the Apollo program), but it wasn’t until I was a medical intern that I decided to get more involved with the space program.

I started working on the physiological effects of space flight and joined a team at the University of Texas Southwestern Medical Center that was studying the cardiovascular system in space. I worked as part of an experiment team for the Spacelab Life Sciences 1 Flight and then I was an alternate payload specialist astronaut for the Spacelab Life Sciences 2 Flight. Ultimately, I flew in space as a payload specialist astronaut on the Neurolab Mission. Along the way I had plenty of help, particularly from my wife and family. And I have been fortunate to work with great teams of people.

Do you remember what it felt like to put your NASA space suit on for the first time?

The suit you wear for launch and re-entry is aptly called the launch-entry suit. For the first research project I worked on for NASA, we needed to make a modification to the launch-entry suit to accommodate one of our experiments. So I worked with the suits for our early research efforts and did training with the suit when I was an alternate payload specialist. But all of my previous experiences with the suit were nothing like the one when I wore it for our launch into orbit. That was a very memorable day.

What were you thinking as you watched the Space Shuttle Atlantis take flight on NASA’s final mission? What was the mood at Cape Canaveral?

I was thinking that even though shuttles have been going into space since 1981, the launch is still amazing. So I was amazed but also sad. The mood at Cape Canaveral was upbeat but the most common adjective I heard used to describe the day was “bittersweet.”

NASA is one of the few government agencies that inspire young people to want to join its ranks. The space program has encouraged young people to explore the sciences as well as their own imaginations. Who or what in your opinion will take that place now?

What makes NASA special, I believe, is that it’s about exploration and knowledge for its own sake. In other words, NASA doesn’t meet an immediate national need, but it does address the future in a way that other agencies can’t. I would like to think that NASA will still continue to inspire and that there will be new initiatives.

Space exploration was one of the key priorities of the Kennedy Administration. After we landed on the moon, the desire to keep exploring seemed to wane in the public opinion. Did America lose its way in supporting the space program?

I thought the various retrospectives to celebrate the end of the millennium in 2000 were very revealing. It was hard to find one that didn’t include images or discussion of the moon landing. Pictures from the Apollo program were on magazine covers, in books, and shown in documentaries.

But interestingly, if you look at a Harris opinion poll done in 1969, the year of the moon landing, only 51 percent of Americans supported the moon effort. Looking back, that seems surprising, since we now see that effort as one of the greatest achievements of the millennium. We need to keep that in mind as we consider the next steps for NASA.

Last question: what happened to the launch-entry suit you wore? Do you get to keep it or is it retired like an NBA jersey?

The launch-entry suits belong to NASA. I do have my blue flight suit, though, that we used for flights in the T-38.