Liliana Ma ’14: On Research and Thinking Outside the Box

Research is important, says Liliana Ma '14, because it is a path to opportunities for expanding the current knowledge base. "So many careers and degrees are aimed at applying existing knowledge, which is obviously very important, but research allows us to think outside the box in areas that are of interest to us personally," she says. 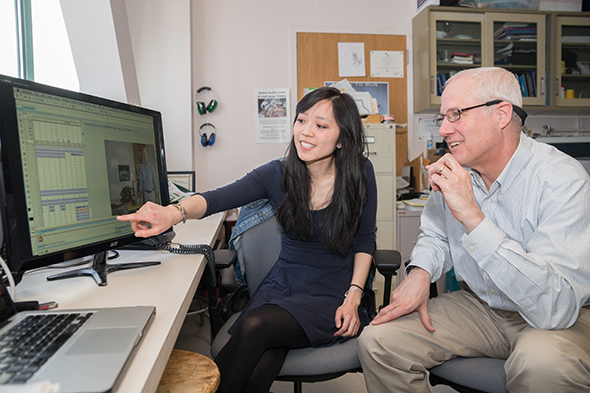 Liliana Ma and her adviser, Professor Jay Buckey, are exploring the intersection of technology and psychotherapy. (Photo by Eli Burakian '00)

Ma came to Dartmouth from Princeton Junction, N.J., where both her parents are engineers. She seeks balance in her own life through a double major in biomedical engineering and music. "The problem-solving aspects of engineering are very interesting to me, but music is on a totally different side of the spectrum," she says. Ma plays both violin and piano, and is a member of the Dartmouth Symphony Orchestra.

Reveling in the diverse range of academic and extracurricular possibilities offered by the College, Ma says, "I don’t think there are many other schools with such strong academic research that would have allowed me to double major in engineering and music."

Ma has been working with Jay Buckey, a professor of medicine at the Geisel School of Medicine and an adjunct professor at Thayer School of Engineering who was an astronaut aboard a NASA Space Shuttle flight as part of the Neurolab mission in 1998. Buckey has an interest in applying multimedia technology to addressing psychosocial problems, and, along with Mark Hegel at Geisel, was part of a team that developed an interactive-media-based depression-treatment program, initially targeted at astronauts on long-term flights.

Her research project has been directed at converting and expanding a computer program that was designed to convey psychotherapeutic treatment. "This program has been found to be effective on other patients as well, and my goal is to figure out what is going on in the program, what the code behind the program is actually doing, and to modify this code to make it compatible with a database system," says Ma.

“Although we developed this program for astronauts, our studies here with employees show that people like the program and rate it highly for therapeutic alliance, which is the bond that people feel with their therapist," says Buckey. "Right now, the program runs on a laptop, but we could reach many more people, and learn more about depression, if we moved the program to the Internet. Liliana has been working on making that happen.”

Reflecting on her research experience, Ma says this kind of engagement as an undergraduate helps students gain an idea of the applications of their fields in the real world. She says that research has also helped her narrow down potential fields of study that she would like to target in the medical field and in graduate school.

Next year Ma will attend a combined MD-PhD program at Northwestern University. "Whatever I wind up ultimately doing, I know that I want research to be a part of my professional life," says Ma.