Dartmouth Rugby had a strong showing when the USA Rugby Men’s National College Academic Honor Roll was released on July 1, with five starting players named to the list: Nate Brakeley ’12, Chris Downer ’11, Victor Galson ’11, Clark Judge ’12, and Will Lehmann ’12. Dartmouth had the most selections of any school in the country. 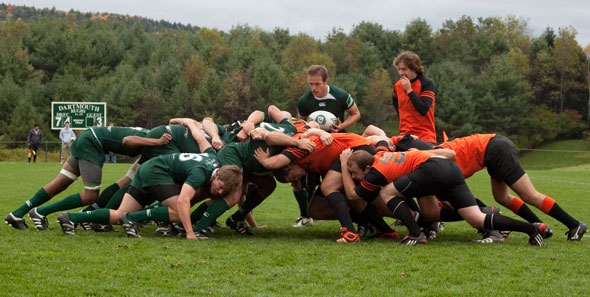 The Dartmouth Rugby Football Club vs. Princeton on Brophy Field at the Corey Ford Rugby Clubhouse. (photo by Joseph Mehling ’69)

This is the first year of the honor roll, an initiative from USA Rugby’s College Department designed to highlight players who display excellence both on the field and in the classroom. In order to qualify for selection, an athlete had to be a starting player and have a cumulative GPA of 3.70 or higher. Only players in their junior year or above were eligible for selection.

“The inclusion of so many Dartmouth players is a tremendous personal achievement for those selected,” said Coach Alexander Magleby ’00, “and just shows you how hard and deliberately Dartmouth student-athletes work.”

The Big Green had plenty to be happy about this year, as Dartmouth’s team also took home the title in the USA Sevens College Rugby Championship at PPL Park in Chester, Pa., on June 5.