Ten members of the faculty have been recognized with 2011 awards from the Office of the Dean of Faculty of Arts and Sciences. The awards honor success in the classroom, scholarly achievement, and one-on-one work with students. Additionally, the graduating Class of 2011 voted to select the winner of this year’s Jerome Goldstein Award for Distinguished Teaching. 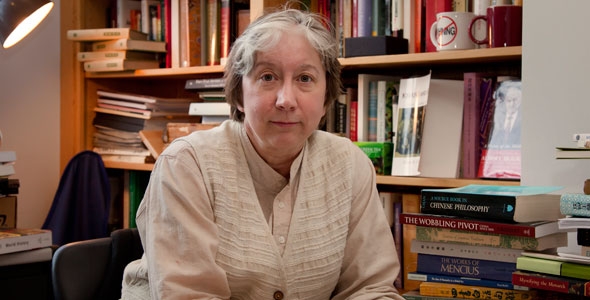 Students in the Class of 2011 voted to recognize Pamela Crossley, a scholar of Chinese history, as an outstanding teacher. (photo by Joseph Mehling ’69)

Pamela Crossley, the Charles A. and Elfriede A. Collis Professor in HistoryThe Jerome Goldstein Award for Distinguished Teaching, chosen by a vote of the Class of 2011

Crossley is a scholar of Chinese history who focuses on the Qing empire (1644–1911), the last empire to rule China and one of the greatest of the early modern period. She has been a Dartmouth faculty member since 1985.

“Dartmouth faculty and students are peculiarly placed to enjoy the benefits of the creative interaction of undergraduate teaching and research,” Crossley observes.  “Active scholars keep their syllabi fresh, and students working at the interface of manuscripts and published work become much more critical and active readers. They can question and criticize the writer in real time, and during a course become active researchers and writers themselves. The synergy between undergraduate teaching and preparing research for publication is widely recognized, but at Dartmouth we have an optimal chance to actually put it into practice.” 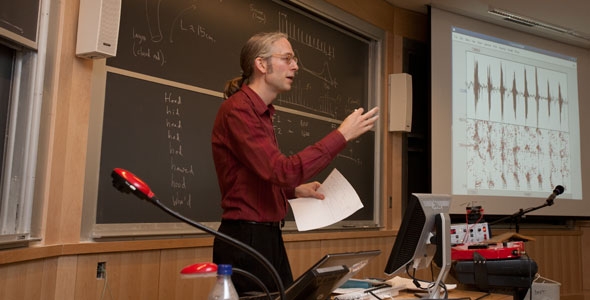 Applied mathematician Alexander Barnett collaborates with faculty from many other disciplines. (photo by Joseph Mehling ’69)

As an applied mathematician, Barnett uses math to model and solve problems posed in science and technology. He collaborates with ecologists who are studying animal habits and ranges, engineers improving biomedical imaging, and musicologists, as well as pure mathematicians. “My work focuses on solving partial differential equations, which are the mathematical objects that describe much of the physical world around us: the flow of heat; the propagation of sound, light, and radio signals; and the quantum wave functions that lie at the root of all matter.”

“Dartmouth is a wonderful environment to pursue my research and teaching goals,” says Barnett. “The interaction with colleagues in both the sciences and the arts, as well as the mathematics department’s John Wesley Young postdoctoral research instructors and graduate students, has taken me in fruitful new directions. The energy and excitement I get back from Dartmouth students in classes, as well as in senior thesis or Women in Science Project (WISP) research, continues to be very rewarding.“

Robert Bonner is a historian of the 19th-century American South. (photo by Joseph Mehling ’69)

Bonner, a historian of the 19th-century American South, is currently researching the geopolitics of American slavery. He brings that international and interdisciplinary approach of his scholarship to the classroom as well. By focusing particular attention on the global framework of American history, he says, “students can appreciate broader patterns of nationalism, war-making, popular government, and the 19th-century transition from slavery to emancipation.”

Dartmouth’s rich holdings of primary materials matter greatly to his teaching. Hands-on contact with items from the past can be transformational, he says. “Most Dartmouth students have a strong background in U.S. history and are well-versed in major interpretive issues. Even so, they are keen to rethink their perspectives, especially when I’ve asked them to use artifacts from the Rauner Special Collections Library and the Hood Museum. My classes have used those collections to root out newspaper coverage of the 1800 presidential election, Civil War-era sheet music, and the antislavery writing of New England women. They’ve opened up whole new ways of approaching the past”

Calsbeek’s work with anole lizards puts evolutionary biology to real-world tests. A recent study, published in Nature, used entire Bahamian islands to evaluate the impact of predation versus competition with other lizards on the survival of the fittest. “Many people are skeptical of evolutionary biology because they perceive it as a purely historical science that can’t be tested experimentally,” notes Calsbeek. That project provided “a real experimental test of natural selection as it happens in the wild. That’s an exciting way for us to advance the public’s perception of evolution.”

“I have the world’s greatest job,” say Calsbeek says of his role at Dartmouth. “I have the chance to interact with students, teach in areas of biology that I am passionate about, and work outside for much of the year. The diversity of experiences is wonderful, and made even better when I can blend the different aspects of my job by taking undergraduates with me to the field.”

Garthwaite retired at the end of spring term 2011 after 43 years of teaching Iranian and Middle Eastern history at Dartmouth.

“What then does history mean, and what do we learn from history?” Garthewaite asks. “When people think back on their undergraduate studies, what do they actually remember? These questions have challenged me throughout my forty-three years of teaching at Dartmouth, shaping the courses I have chosen to teach and the syllabi I developed for those courses.”

He adds that, ”What I will miss the most in retirement are the many interactions with students as they discover the excitement of studying an important part of the world and as they go on to the next phase of their lives.” 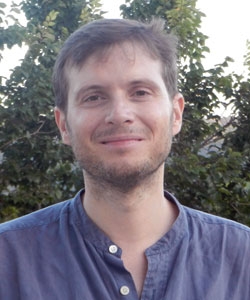 A widely published specialist in the politics of Spanish historical memory and a student of Spanish national identity and contemporary culture, Gómez joined Dartmouth’s faculty in 2005. Gómez centers his research and teaching on three main themes: historical memory and the representation of the Spanish Civil War, transatlantic relations between Latin America and Spain/Europe, and the presence of the sublime in contemporary Spanish culture.

As a teacher, Gómez aims “to motivate students to find their own critical voices. My teaching style encourages the constant exchange of arguments, creating an environment where the student engages in a permanent dialogue with her or his peers, and with me. Respectful and open communication with my students keeps them focused on what is expected from them, and at the same time, they understand that I am there to help them to do their best.” 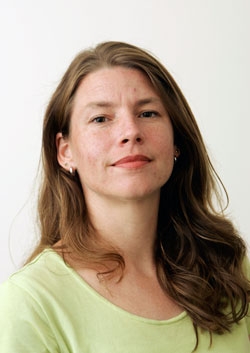 Robyn Millan involves students in her studies of the radiation belts that surround the Earth. (photo by Joseph Mehling ’69)

Robyn Millan, associate professor of physics and astronomyThe Dean of the Faculty Award for Outstanding Mentoring and Advising, in recognition of outstanding contributions to Dartmouth and career distinction

Millan studies the radiation belts that surround the Earth. She’s also a principal advisor for Dartmouth’s GreenCube project, an undergraduate student-driven research program for the development of low-resource spacecraft. “I have seen that when students take ownership of a research project—when it really becomes their own—they become so motivated and can do amazing things. GreenCube is a great example of that happening at Dartmouth,” she says.

“I have been really fortunate to work with so many fantastic students at Dartmouth,“ she adds. ”They have all contributed a great deal to my research, whether they are first-year Women in Science Project (WISP) students or the most senior graduate student. It is so rewarding to see how they mature as scientists and start bringing their own ideas and creativity to the project.” 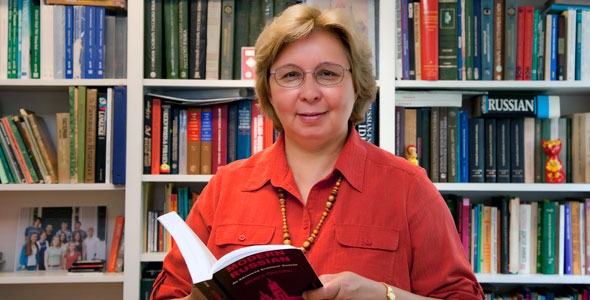 Alfia Rakova, senior lecturer, Russian language and literatureThe Dean of the Faculty Teaching Award for Visiting and Adjunct Faculty, in recognition of outstanding contributions to Dartmouth and career distinction

Rakova takes on all levels of Russian instruction at the College, from introductory Russian to advanced grammar.

“It’s been such a joy to teach the Russian language at Dartmouth,” says Rakova, a senior lecturer in Russian language and literature at the College since 2007. “My students have been courageous and passionate in tackling this difficult language. Their great sense of humor and openness to other cultures and traditions has been amazing. I am truly privileged not only to teach Russian at Dartmouth but likewise to witness how my students become mature and open-minded people in dealing with the language and culture.” 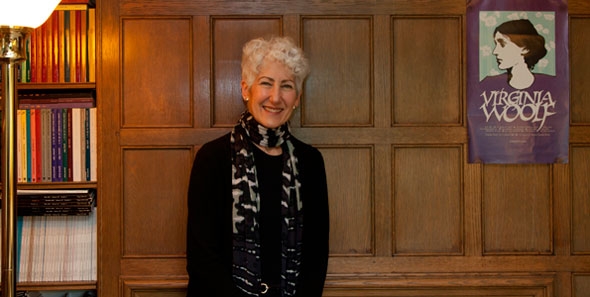 Brenda Silver, professor of English emeritusThe Elizabeth Howland Hand-Otis Norton Pierce Award for a faculty member who is an outstanding teacher of undergraduates

Silver retired from the Department of English at the end of spring term 2011, nearly four decades after arriving in 1972, the same year as the women who first matriculated as four-year students at the College. She originated the English department course “Women and Literature: A Feminist Perspective,” co-founded the Women’s Studies Program, and was a mentor to many students, including author Louise Erdrich ’76.

“What is it that has made my 39 years at Dartmouth so special? I know it’s a cliché to say ‘the students,’ but that is actually the case: smart, inquiring, creative, willing to take intellectual risks,” Silver says. “In terms of my own growth, the openness to new courses and to interdisciplinary collaboration has allowed me to branch out in both my teaching and my research: to move from modernism to postmodernism to cyberculture, learning from others as I went. And, having arrived at Dartmouth with the first class of women students and helped create the programs and environment necessary for change, it gives me great pleasure to see women students and faculty flourishing at Dartmouth today.” 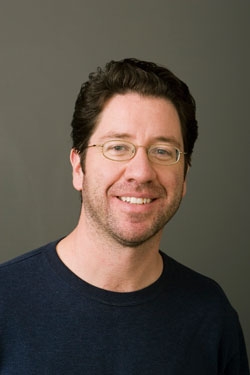 Paul Whalen, professor of psychological and brain sciencesThe John M. Manley Huntington Award for Newly Promoted Faculty in recognition of faculty who have been made full professors and have outstanding teaching and research records

More than a decade ago, Dartmouth became the first liberal arts school in the country to own and operate an fMRI machine for strictly research purposes—and Whalen is among the Dartmouth faculty members who put the technology through its paces.  He and his research team study the amygdala, a part of the brain that they believe modulates “moment-to-moment levels of vigilance,” and plays a key role in human emotion, including anxiety.

“My lab uses the functional brain scanner in Moore Hall to conduct research at the interface of neuroscience, emotion, and mental illness,” says Whalen. “Our graduate students have interests as varied as anxiety, psychopathy, and music. Our undergraduates usually go on to be research assistants in psychiatric neuroscience labs in anticipation of applying to graduate school.” Collaborating with students, he says, is vital to his work: “My success has been driven in large part by students who excel at reformulating what I teach them to make something new.” 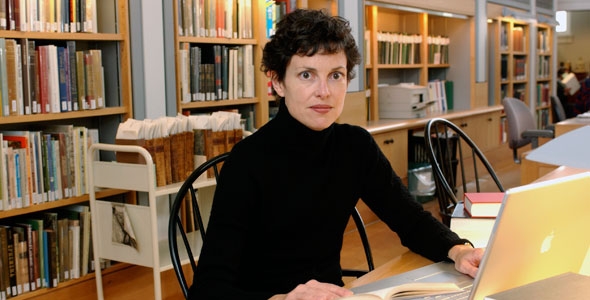 Barbara Will, professor of EnglishThe John M. Manley Huntington Award for Newly Promoted Faculty in recognition of faculty who have been made full professors and have outstanding teaching and research records

Attention to context and to detail are a hallmark of Will’s work as a scholar and teacher. A student of Gertrude Stein and those around her, Will explains that her “work and teaching focus on literary modernism and the intersections between culture and context in the 20th century. My most recent book is on the experience of the second World War in Stein’s work and life.” Unlikely Collaboration: Gertrude Stein, Bernard Faÿ, and the Vichy Dilemma is being published by the Columbia University Press in September.

“In the classroom,” says Will, “I work with the students on three things: interpretation of literary form and content (using theoretical or historical frameworks), development of close reading skills, and exacting attention to expression in English.”