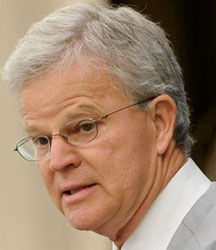 Charles “Buddy” Roemer, former governor of Louisiana, will deliver the next “Leading Voices in Politics and Policy” lecture on Thursday, July 21.

Roemer will present “A Road Map for the American Middle Class.“ In the face of widespread economic dislocation, stagnant wages, and rising inequality, he’ll speak about what the federal government can—or should—do to broaden economic opportunity and security for “typical” Americans. His lecture, the fourth in the new series which runs through August, begins at 4:30 p.m., in Moore Theater in the Hopkins Center. It is free and open to the public.

The ”Leading Voices“ series, which is bringing national political and policy experts and presidential candidates to Dartmouth, is sponsored by the Office of the President and Nelson A. Rockefeller Center for Public Policy and the Social Sciences at Dartmouth College.

Roemer, who is widely touted as a presidential candidate but has not yet declared that he will run for the Republican nomination, served four terms in Congress, from 1981 to 1988, as a conservative Democrat who often broke ranks with his party to vote with President Reagan. He was governor of Louisiana from 1988 to 1992. Elected governor as a Democrat, Roemer changed his party affiliation to Republican in 1991.

Roemer’s speech, along with others in the series, will be available for viewing on Dartmouth’s YouTube channel after his talk.