Rudy Giuliani criticized U.S. leaders’ intractable debt limit negotiations, provided his prescription for the ailing economy, and mused about a moderate Republican’s chance at winning the GOP nomination for the presidency, in a swing through New Hampshire that included a stop at Dartmouth College.

The former New York City mayor said he’ll decide next month whether to make a second run for the presidency. 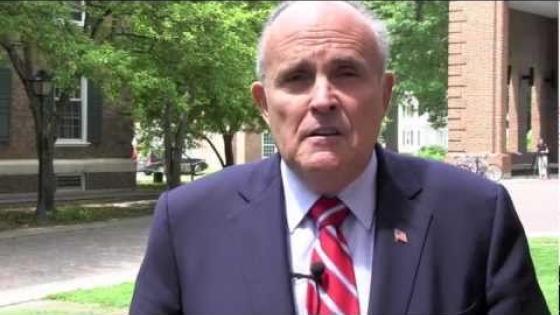 Giuliani’s Friday, July 15, visit to Dartmouth, included talks to government classes, hobnobbing at a private reception hosted by Tuck School of Business adjunct professor and former Ambassador to Bermuda Gregory Slayton, and a visit with the Dartmouth College Republicans as he tests the political waters in New Hampshire, which holds the first-in-the-nation presidential primary.

His visit comes as the College hosts national political and policy experts in the new “Leading Voices in Politics and Policy” summer lecture series. The series will be followed this fall by a Republican presidential candidate debate, set for October 11, and hosted by Dartmouth, Bloomberg Television, The Washington Post, and WBIN-TV.

In the “American Political Institutions” class taught by Associate Professor Deborah Brooks, Giuliani chided President Obama and Congressional Republicans for refusing to compromise in ongoing talks on whether to raise the federal debt limit. Republicans need to accept lower spending cuts and Obama has to give up trying to raise taxes, he said.

“They’re not acting like adults. They’re acting like children in a playpen who want all the toys to themselves,” said the former mayor.

In an interview after the government classes, Giuliani offered his cure for the ailing economy — reduce the federal budget, lower taxes, and realize that the economy is an integral part of the country’s foreign policy.

Can the more moderate Giuliani — who told students he opposes abortion but wouldn’t outlaw the procedure, and spoke out against discrimination of gays and lesbians — win the backing of the GOP base, a student asked Giuliani.

“That happens to be exactly what I’m thinking right at this minute as I’m here in New Hampshire,” he said.