Huntsman at Dartmouth: US Must Regain ‘Majesty,’ World Prominence

Republican presidential candidate Jon Huntsman Jr. called for a balanced budget amendment, overhaul of the tax system, reduced regulation, energy independence, and a pullback from foreign engagement in a July 26 speech that drew heavily on his last job as ambassador to China. 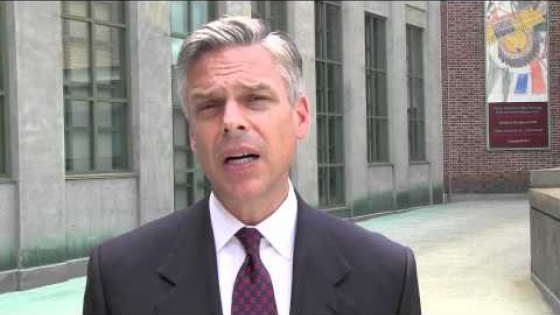 He compared the energy of China’s people and the country’s three decades of strong economic growth to the “funk” that he said has settled over the United States.

“We don’t project that goodness, that majesty that we once did. We can do better, and we must do better,” said Huntsman, who was also Utah’s governor from 2005 to 2009. In January he left the ambassador’s job to begin a run for the presidency.

Huntsman spoke to a full house in Moore Theater in the College’s “Leading Voices in Politics and Policy” lecture series, walking on stage as he talked, at times, directly to students in the front rows.

“The 2012 election is going to be about your generation, you students who are here. I’m calling on you and asking for you all to get involved,” he said.

Huntsman is the second declared Republican candidate to deliver a public lecture at Dartmouth in less than a week. Former Louisiana Gov. Buddy Roemer on July 21 announced his run for the presidency in Hanover, then walked across the street to speak to a class of students and deliver a public lecture. Additionally, students have also heard from former New York City Mayor Rudy Giuliani, who is testing the political waters for a possible presidency bid, and Republican presidential hopeful Gary Johnson, the former governor of New Mexico. Both Johnson and Giuliani spoke to students but didn’t deliver a lecture.

“I hope they appreciate it as much as those of us who are more mature,” Obenshain said, adding that the summer lecture series reminds him of the Great Issues course, which was required attendance for every senior when he was at Dartmouth. “It’s a great thing.” 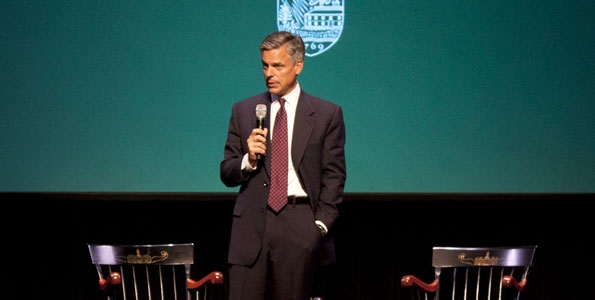 Jon Huntsman delivers his public lecture on U.S. foreign policy, among other topics, to a packed audience in the Moore Theater at the Hopkins Center for the Arts at Dartmouth. (photo by Joseph Mehling ’69)

The Leading Voices series, which this summer is bringing national political and policy experts and presidential candidates to the College, is sponsored by the Office of the President and Nelson A. Rockefeller Center for Public Policy and the Social Sciences at Dartmouth College. Each lecture addresses a major topic shaping current policy and political debate at the national level. Other speakers have included Treasury Secretary Tim Geithner ’83; Sen. Rob Portman ’78, (R-Ohio); former Sen. Judd Gregg, (R-N.H.); and Dartmouth President Jim Yong Kim.

Later this week, Joel Klein, the former chancellor of New York City public schools who is currently overseeing the internal phone hacking investigation at News Corp., will speak. His Thursday, July 21, lecture is at 12 noon, in the Hopkins Center’s Moore Theater.

Huntsman’s speech, along with others in the series, is available on Dartmouth’s YouTube channel. For the most current news and schedule, see the “Leading Voices in Politics and Policy” lecture series website.

The former ambassador yesterday said the United States should get out of Libya and Afghanistan and shouldn’t engage further in Pakistan.

He also called for new investment in natural gas and nuclear energy, as well as alternative forms of energy, to wean the United States off foreign oil. And he said the country should begin a long-term dialogue with China, driven by the next president, that includes discussion of human rights, the role of the Internet, and political reforms.

Huntsman’s Dartmouth speech was his second visit to Hanover. His first foray into New Hampshire retail politics came in May, with his appearance—attended by several Dartmouth students—at Jesse’s Restaurant. The Upper Valley is a regular stop for presidential candidates who every four years try for a strong showing in New Hampshire’s first-in-the-nation primary.

“How you do it in New Hampshire is pretty extraordinary. This is politics American style,” Huntsman told the Dartmouth crowd.