Investigator Spotlights: Learning to Fly; Software to See Inside

Dartmouth researchers were awarded $27.1 million during April and May, including $5.8 million in new and competing awards. View the complete list of awards for April and May, as reported by the Office of Sponsored Projects. Here, Dartmouth Now spotlights three investigators and their work.

Pathfinder: “The project is a pathfinder for possible future instruments in our scientific research work studying the aurora,” Lynch says. “It is really great to see it all come together and to see how much the undergraduates learn and accomplish through the process,” adds Millan. “I believe and have seen that when students take ownership of a research project—when it really becomes their own—they become so motivated and can do amazing things.”

Teamwork: Dartmouth undergraduates Parker Fagrelius ’07, Alex Crew ’08, and Phil Bracikowski ’08 started the GreenCube project, which has been funded by the Jet Propulsion Laboratory for five years and includes collaborators from JPL,  the University of New Hampshire, Cornell, and the University of Alaska.

Brian Pogue, Dean of Graduate Studies and professor of engineering 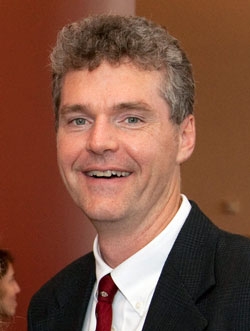 Professor of Engineering Brian Pogue and his team continue to refine software which will enable the clinical of use light-based medical imaging. (photo by Joseph Mehling ’69)

Illuminating Software: “Because of signal-distortion caused by tissue shape and composition, it has always been challenging to use optical images quantitatively in biomedical applications,” according to Pogue. NIRFAST software is a finite-element based package for modeling near-infrared light transport in tissue for medical applications.  Based largely on the programming language MATLAB, it is open source, free, and cross-platform.

To the clinics: “Our plan is to keep the software advancing towards a clinically usable interface, allowing quantitative imaging in oncology and brain function applications,” Pogue says. The software is currently used in clinical trials with Keith Paulsen, Robert A. Pritzker Professor of Biomedical Engineering and professor of radiology at Dartmouth Medical School, who develops new systems for optical spectroscopy of breast cancer. Other centers use the software for interpretation of optical measurements of brain function or to predict light distributions in tissue during laser-based cancer therapies.

Teamwork: Starting in the year 2000, NIRFAST was a collaboration between Pogue, Paulsen and Hamid Dehghani, formerly at Dartmouth and now a lecturer at the University of Birmingham, UK. Dartmouth doctoral student Michael Jermyn is currently one of the project’s lead developers. The software is used and updated by a large group of researchers at Dartmouth and throughout the world.