As part of Dartmouth’s flourishing partnership with the eight-year-old American University of Kuwait (AUK), five AUK students and two faculty members are studying and working at Dartmouth this summer. The partnership is unusual in higher education, with Dartmouth serving as an advisory partner to AUK, which is an autonomous, private liberal arts institution. 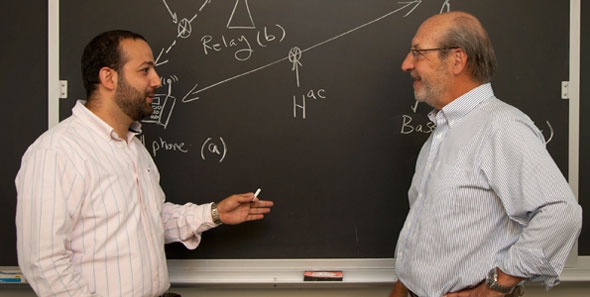 This summer, Mohamad Awad of the American University of Kuwait (left) is collaborating with Dartmouth’s George Cybenko on behavioral modeling of telecommunications customers. (photo by Joseph Mehling ’69)

Each summer, AUK selects a promising faculty member for its AUK-Dartmouth Fellowship. This year, Assistant Professor of Computer and Electrical Engineering Mohamad Awad is at Thayer School of Engineering, where he’s working with Dartmouth’s George Cybenko, the Dorothy and Walter Gramm Professor of Engineering, on behavioral modeling of telecommunications customers. Outside the lab, Awad has canoed on the Connecticut River and gone horseback riding at Morton Farm with his family. “George and his research group are world-leading experts in the field of behavioral modeling,” says Awad. “He is a man of great humanity, and working with him is having a positive impact on every aspect of my research.”

22 Dartmouth students have participated in internships at AUK since 2005. The most recent was Travis Cramer ’12, who interned in AUK’s writing center and other offices in spring 2011. Scheduled to participate this year are Shloka Kini ’13 in fall 2011 and Jacqueline Waugh ’13 in spring 2012.

19 AUK students have visited Dartmouth since 2007.

3 AUK faculty members have served as AUK Faculty Fellows at Dartmouth since 2009.

12 Dartmouth faculty members and administrators have visited AUK since 2003.

AUK President Winfred Thompson says, “We’ve been very pleased with our relationship with Dartmouth, which has extended to a number of areas. The concept of liberal arts education is not always easily understood in the Arabian Gulf region. But there are people passionate about the liberal arts here, perhaps no one more so than our founder and chair of the Board of Trustees—Shaikha Dana Nasser al-Sabah. Our emphasis on the liberal arts is why we so value Dartmouth’s partnership.”

“Despite its relative youth, AUK is a robust and thriving university that has become a major force in higher education in the Arabian Peninsula,” says Laurel Stavis, executive director of the Dartmouth College–American University of Kuwait Project. “There is now true interconnectedness between our two institutions.”

Other examples of that “interconnectedness” this summer included a visit by AUK Assistant Professor of English James McDougall, who participated in Professor Donald Pease’s New Futures in American Studies Institute. Pease, the Ted and Helen Geisel Third Century Professor in the Humanities, invited McDougall after the two met in Kuwait in March 2011. 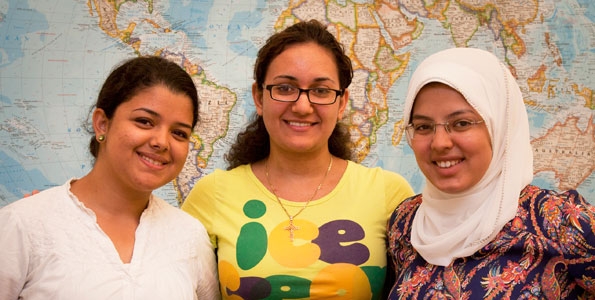 Student interns from the American University of Kuwait (from left) Sara Soliman, Hala Botros, and Nada Bedir worked in Dartmouth departments and audited courses this summer. (photo by Joseph Mehling ’69)

Nada Bedir, a rising senior at AUK, interned with Dartmouth’s Rassias Center for World Languages and Cultures and audited courses in the anthropology and government departments. Recent AUK graduate Hala Botros and rising junior Sara Soliman are spending four weeks interning at Dartmouth in the Office of Public Affairs, the Hood Museum of Art, and the Department of Film and Media Studies. Their tasks included interviewing international students for a video and writing curatorial reports for recently acquired photographs and oil paintings. Botros is interested in a career in marketing and communications, and Soliman plans to work in the field of fine arts and design.

“Dartmouth is filled with enthusiasm in the summer,” says Botros, who said she enjoyed meeting alumni at Dartmouth events on campus. “At AUK there aren’t as many alumni because we’re such a young university.” Soliman, a flautist, says she’s especially enjoyed informal conversations with students and visiting the Paddock Music Library. “The amount of sheet music at Paddock was unbelievable,” she says. “I could spend hours leafing through the scores.” Soliman, who is editor-in-chief of the AUK Literary Review, also met with co-editors of Dartmouth’s Stonefence Review Krista Oehlke ’13 and Naomi Elias ’13.

Since AUK’s founding in 2003, Dartmouth’s relationship coordinator for the project has been Dale F. Eickelman, the Ralph and Richard Lazarus Professor of Anthropology and Human Relations. Eickelman says, “This partnership is an opportunity for Dartmouth to help shape a liberal arts university in a very different, diverse environment. The partnership not only provides mutual student and faculty enrichment, it helps us expand our academic imaginations.”