Ohio Senator Rob Portman ’78 taught a class for sophomores on Monday, July 18, 2011, as part of a new integrated course and lecture series taking place this summer at Dartmouth. 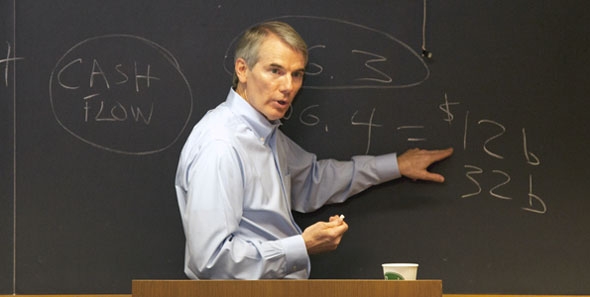 Portman, a Republican who has also served as U.S. Trade Representative and director of the federal Office of Management and Budget before winning election to the Senate, “did an amazing job of addressing the challenges of trade and globalization both as a former U.S. trade representative, whose job was to promote trade, and as someone who needs to get elected in Ohio, where there is clearly a lot of fear and concern about trade, outsourcing, and the like. He has a unique grasp of both the substance and the politics of the issue,” said visiting Professor Charles Wheelan ’88 of the Harris School at the University of Chicago, who is leading the course.

The team-taught course, called “Contemporary Issues in American Politics and Public Policy,” is paired with the “Leading Voices in Politics and Policy” public lecture series, which is bringing national experts and presidential candidates to Dartmouth. The course and lecture series are sponsored by the Office of the President and Nelson A. Rockefeller Center for Public Policy and the Social Sciences at Dartmouth College. Guest lecturers, in most cases, speak to the class in advance of presenting a public lecture. Several speakers—Portman and former New York City Mayor Rudy Giuliani, who was on campus July 15—talked to students but did not deliver public lectures.

“The benefit of having speakers in class is that we can go deeper. Students have a chance to ask questions, to push back, or to otherwise engage in a way that they can’t in a large public forum. It’s more of a dialogue than a speech, which is a great way to gain a depth of understanding on these complex policy issues,” said Wheelan, a former member of the Board of Visitors at the Rockefeller Center who has returned to his alma mater each year since 2006 to teach summer courses in economics and public policy.

Portman, who also spent a dozen years in the House representing Ohio’s Second District, is being mentioned as a candidate for higher office and part of what the Post called a “dwindling sanity caucus” in the increasingly partisan Congress.

“This is a time in our country’s history when we have to figure out how to focus on results or we will fall further behind,” he told the Post.

Read about Portman in The Washington Post, which charmingly refers to Portman as “the bland Ohioan,” and The Hill’s Pundit’s Blog.