Two past Dartmouth winners of the American Chemical Society (ACS) Award for Creative Work in Fluorine Chemistry are again in the society’s spotlight. David M. Lemal, who won the award in 2002, and Russell P. Hughes, a 2010 award recipient, are now being named ACS Fellows. They join the new class of 213 fellows that will be honored at the society’s fall national meeting in Denver this month.

“ACS is especially proud to honor these chemists during the 2011 International Year of Chemistry,” said ACS President Nancy B. Jackson of the 2011 class of fellows. “The work they are doing will improve all of our lives as they unleash the power of chemistry to solve global challenges.” 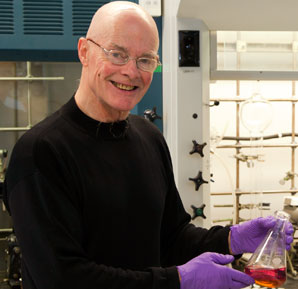 His passion for fluorocarbon research keeps Professor Emeritus David Lemal in the lab and has put him in the ACS spotlight twice. (photo by Joseph Mehling ’69)

Lemal and Hughes have both worked on organic fluorine compounds known as fluorocarbons. The importance of these compounds derives from their myriad uses, Lemal points out. “Everyone knows about Teflon, but not about the variety of roles fluorocarbons and their derivatives play in microchip manufacture or their use as textile and carpet finishes, firefighting foams, inhalation anesthetics, and oxygen carriers in blood substitutes—just a few of their applications,” Lemal says.

Lemal, the Albert W. Smith Professor of Chemistry Emeritus, joined Dartmouth in 1965 and since 2006 has continued to conduct research as an emeritus faculty member. An organic chemist, Lemal and his group focus on the synthesis and chemistry of novel fluorocarbons, especially highly strained compounds—those with excessive stored energy. The overarching goal of their research is to further knowledge and understanding of the changes in properties and reactivity that result from incorporating fluorine into organic molecules.

“I am delighted to join my esteemed colleagues Russell Hughes and Peter Jacobi as an ACS Fellow,” Lemal says. “As this honor is based on research accomplishment as well as service to the chemistry profession, I thank the many able and dedicated undergraduate, graduate, and postdoctoral coworkers who have shared my laboratory during the past fifty-plus years.” 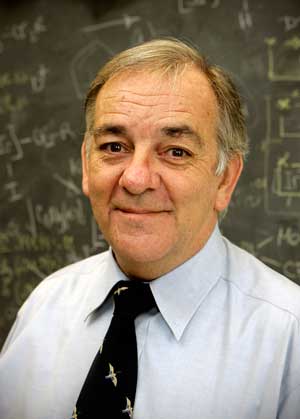 Hughes, the Frank R. Mori Professor of Chemistry, has been a Dartmouth faculty member since 1976 and is also engaged in fluorine research using organometallic molecules. A focus of Hughes’ work is one aspect of fluorocarbons that has generated public concern. When combined with chlorine, they become chlorofluorocarbons (CFCs)—potent greenhouse gases. Used as refrigerants and aerosol propellants for decades, they are known to have damaged Earth’s protective atmospheric ozone layer.

Hughes’ research is specifically directed at reducing atmospheric ozone destruction by finding new molecules that take the place of and do the job of CFCs. He has been seeking new ways to break the carbon-fluorine pairing in order to make replacement molecules less expensive to develop. “Designing methods of doing this in a chemically selective and environmentally benign way has been the focus of my group’s research over the past decade or so,” says Hughes.

On being named an ACS Fellow, Hughes says “I am very pleased that the research carried out in my group over the past 30 years has been recognized in this way. I take it as a tribute to the many talented students with whom I have had the pleasure of working. I am also humbled to be thought of in the same company as so many distinguished chemists, most especially my colleagues David Lemal in this year’s class, and Peter Jacobi, one of last year’s class of fellows.”

The ACS Fellows program began in 2009 as a way to recognize and honor ACS members from academe, industry, and government for outstanding achievements in and contributions to science, the profession, and ACS.