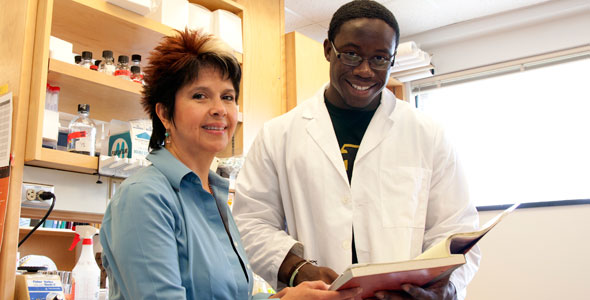 Tyler Melancon in the lab with Yolanda Sanchez, an associate professor of pharmacology and toxicology at Dartmouth Medical School. Melancon spent his summer doing research in Sanchez’ lab. (photo by Joseph Mehling ’69)

Melancon, a linebacker on the Big Green football team, spent this summer performing cancer research in the lab of Yolanda Sanchez, an associate professor of pharmacology and toxicology at Dartmouth Medical School. “I can say with pride that Tyler is one of the top students I have had the honor to work with,” said Sanchez. “I never thought football hands could be research hands.”

He became interested in cancer research while watching his grandmother successfully battle the disease twice. “It’s a very unpredictable disease and there’s still so much work to do,” said Melancon, who was a Norris Cotton Cancer Center research fellow and also received support from the John L. Murphy Family Fund Award. He plans to return to work in Sanchez’s lab at the conclusion of football season. 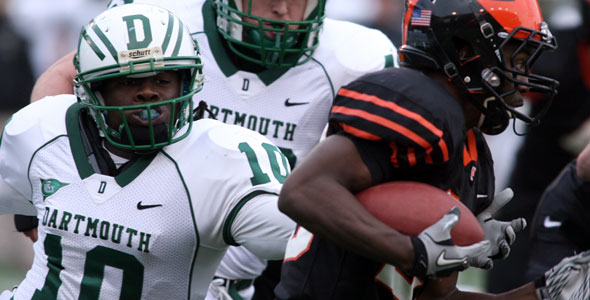 Linebacker Melancon (No. 10) gets a hand on a Princeton player in the Big Green’s 31-0 victory over the Tigers in November 2010. (photo by Beverly Schaefer)

“Tyler is juggling a lot of things, but that’s the type of person we look for,” said Buddy Teevens, the Robert L. Blackman Head Football Coach. “He takes his studies just as seriously as he does his play on the field; he’s the type of student-athlete we hold up as an example of what our school is about.”