Look for mentors, international diplomat Mara Rudman ’84 told students as she taught a class as part of the this summer’s “Leading Voices in Politics and Public Policy” lecture series, which is bringing national political and policy experts and presidential candidates to Dartmouth. 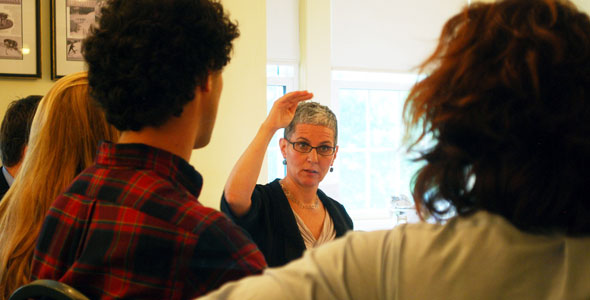 Mara Rudman ’84, deputy Middle East envoy at Department of State, speaking with Dartmouth students during a luncheon at the Hanover Inn. Rudman came to Dartmouth as part of the “Leading Voices in Politics and Policy” lecture series. (photo by Corinne Arndt Girouard)

Rudman, who is currently deputy Middle East envoy at the Department of State, talked about her work in the Obama and Clinton administrations in her August 16 classroom visit and in an interview later reflected on her time at Dartmouth.

“Dartmouth is the place where I started getting exposed to a much broader world than I’d seen before,” she said. “I came away with greater confidence in myself, which was a tremendous gift.”

She also gained the sense that she would be able to “hold my own in any room, which I didn’t have before I got here. Going out into the world with that feeling was huge.”

And Rudman has been out in the world for two decades now. In addition to her current posting as deputy envoy and chief of staff in the Office of the Special Envoy for Middle East Peace at the State Department, she has served as deputy assistant to President Obama and executive secretary to the National Security Council. She also worked as a deputy national security advisor and National Security Council chief of staff to President Clinton and, earlier in her career, was chief counsel to the House Foreign Affairs Committee under then-Chairman Rep. Lee Hamilton, (D-Ind.).

“Look for good teachers wherever you are,” she told the students. 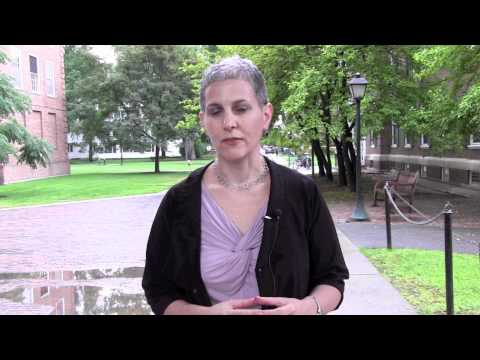 Others visitors to campus this summer have delivered public lectures in the series. For a complete listing of series participants, see the “Leading Voices in Politics and Policy” website. The lectures are available on Dartmouth’s YouTube channel. Each lecture addresses a major topic shaping current policy and political debate at the national level. The issues include the federal deficit, health-care reform, public education, financial bailouts, and partisan politics.

This summer isn’t the only time presidential candidates will visit Dartmouth. Republicans running for the presidency will be on campus for a debate on the U.S. economy on October 11. Hosted by Dartmouth, Bloomberg Television, The Washington Post, and WBIN-TV, the event will be broadcast nationally and around the globe by Bloomberg Television and streamed online by Washingtonpostlive.com.