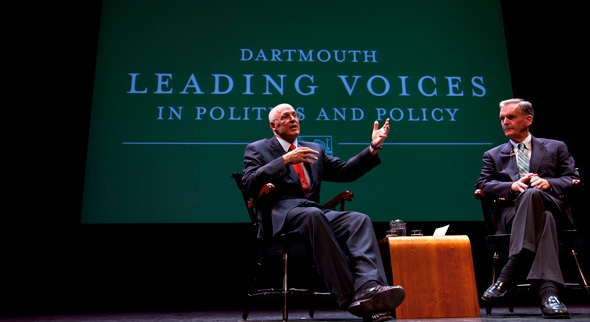 But, Paulson said in an August 11 lecture at Dartmouth, those changes aren’t likely to happen before the next election.

Reform “can only be done on a bipartisan basis. And that can only be done when both parties want to compromise and cooperate. And I don’t think we can do that with the players we’ve got in Washington. I think we need a new election, but I hope I’m wrong,” he said.

Paulson’s lecture is part of the new “Leading Voices in Politics and Public Policy” lecture series, which this summer is bringing national political and policy experts and presidential candidates to Dartmouth.

Paulson, who is also a former chairman and CEO of Goldman Sachs, spoke to a large crowd in Spaulding Auditorium, answering questions from the audience and former New Hampshire Senator Judd Gregg, a Republican, who asked Paulson for his take on the Tea Party movement.

“There were a lot of people that came in in the last election (and) the voters wanted them to come in and change government. I’m hoping that the next election, the voters will say ‘You know what, we want you to come in and compromise and solve problems and fix what’s wrong,’ ” said Paulson. “Maybe I’m being naive, but I would like to see the fiscal deficit be the centerpiece of the campaign. And then, whoever wins will be motivated to come in and solve these problems.”

Paulson credited Gregg with coming up with the idea that ultimately led to the creation of the special Congressional committee being appointed this week to find ways to reduce the federal budget deficit. 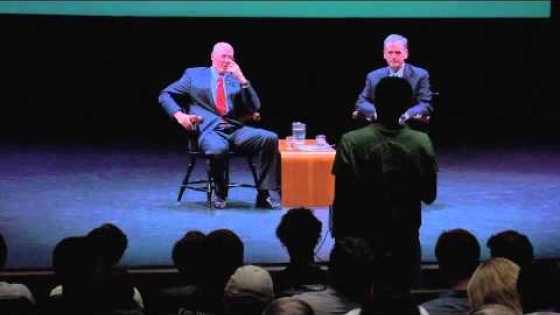 Paulson’s speech, along with others in the series, is available on Dartmouth’s YouTube channel. For the most current lecture series news and schedule, see the “Leading Voices in Politics and Policy” website.

The next speaker is Jeffrey Immelt ’78, CEO and chairman of GE and a Dartmouth trustee, who will speak on August 18 at 4:30 p.m., in the Hopkins Center’s Moore Theater.

Paulson, who is now chairman of the Paulson Institute at the University of Chicago, also told the audience he’s impressed by the caliber of students he met earlier in the afternoon when he taught a public policy class.

“The sophomores were asking me all kinds of sophisticated questions,” he said. As a student, “I didn’t know what an investment banker was. I was an English major. I didn’t know the difference between a stock and a bond.”