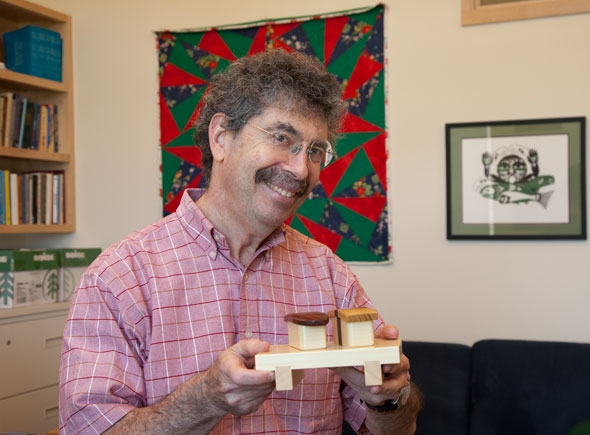 Professor Peter Winkler loves a good puzzle, including this sushi-inspired design. His newest book, Bridge at the Enigma Club, includes instruction on “how to use the principles of cryptography to effect secret communication in the game of bridge.” (photo by Joseph Mehling ’69)

Covering all the bases, Winkler holds appointments and teaches in both the mathematics and computer science departments. He is the first holder of the newly established William Morrill Professorship and is one of three faculty members to receive inaugural appointments to endowed chairs this year.

But the word on the street about Peter Winkler revolves around what he calls his mathematical avocations. These side interests propel his engagement with students far beyond the precincts of the classroom. He is known as an expert in the world of puzzles and a maven in the game of bridge.

Of the puzzles, Winkler says, “I’m not sure, but the reason I like mathematics may be because of the puzzles, rather than the other way around.” He is intrigued by all kinds of puzzles, both mechanical and mathematical. Puzzle developers worldwide seek his input on their designs and their prototypes line his bookshelves.

Winkler is famous on campus for having organized the highly successful Mechanical Puzzles Day at Dartmouth in 2008. “We had a whole day where the top international puzzle designers, builders, and collectors came to campus to show off their wares and give talks,” says Winkler. “The six presentations were standing-room-only.” The day was topped off with a Puzzle Party for students in the evening.

But Winkler’s newest book, Bridge at the Enigma Club (2010), is not at all about puzzles. It’s about mathematics of the game of bridge and has been nominated for Bridge Book of the Year by the International Bridge Press Association. “The book also shows how to use the principles of cryptography to effect secret communication in the game of bridge,” he explains.

Winkler recently returned from Toronto where Dartmouth’s intercollegiate bridge team competed in the finals of the North American Bridge Championships. “This is the first time the team had ever made the finals and they did very well,” says Winkler, the team’s coach. “Dartmouth came in sixth out of nine, a very fine performance for a first-time finalist. I am very proud of them.”

The new William Morrill Professor will spend the coming academic year on the West Coast, on sabbatical pursuing his research interests. In the fall, Winkler will be at Microsoft Research in Redmond, Wash., and he will spend winter and spring at the Mathematical Sciences Research Institute (MSRI) in Berkeley, Calif.

“MSRI is having a special focus on something called random spatial processes. People are coming from around the world for that. I found that irresistible,” says Winkler with a smile.

The endowment for Winkler’s chair was established with a gift from the estate of May E. Morrill, in memory of her father, William Morrill, a member of the Class of 1874.