Time is running out for the Obama campaign, according to Gallup Poll Editor-in-Chief Frank Newport, who said that President Barack Obama will make history if he is re-elected after recording the lowest approval rating this month of any modern president in the August preceding an election year.

“Ten presidents have run for re-election since we’ve had modern polling, since Harry Truman. Seven of them have been successful, and three have been defeated. … in August before his election year his current 38 percent job approval rating is lower than any other president who was successfully re-elected. So history would say he’s in big trouble,” Newport told the audience in Moore Theater at Dartmouth on August 23.

Newport pointed out that Presidents Bill Clinton and Ronald Reagan both recovered from job approval ratings that were in the mid-40s in the month of August prior to their re-election years, and that Reagan won by a landslide.

“So it’s possible to recover,” said Newport, adding that the only bump Obama has received in recent months was following the death of Osama Bin Laden, when his approval rating increased to 52 percent.

“But Obama needs to be up at 48 or 50 percent, minimum, to be in a good position to win re-election … he’s going to have to make that U-turn and start coming back up pretty soon.” 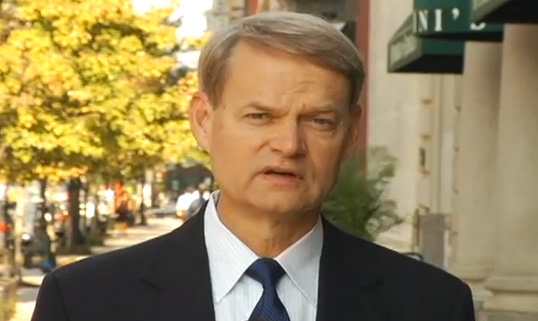 Newport spoke as the final lecturer in this summer’s “Leading Voices in Politics and Policy” series, which brought national political and policy experts and presidential candidates to Dartmouth.

His work focuses primarily on the analysis of the public’s views of their elected officials, and public attitudes and behavior relating to key policy and issue areas— the economy, religion, well-being, and indicators of public mood and consumer behavior. His analyses appear on gallup.com, in his blog Polling Matters, in books and other publications, and on video, podcasts, and through radio and television appearances.

Newport said that Gallup conducts telephone polls with a random sample of 1,000 Americans every night, and their research shows that people are distrustful of government and “none too happy with what’s going on in Washington.”

Thirteen percent approve of the job that Congress is doing, the lowest poll number in Gallup history, and when queried about the perceived honesty of a list of professions, only used car salesmen and lobbyists rated lower than members of Congress, said Newport, who is also immediate past president of the American Association for Public Opinion Research.

“Our elected representatives have to use some criteria to make decisions and I’m saying one of the strong criteria that these men and women should use is to systematically and publically take into account what the great mass of Americans are thinking and feeling about these issues,” said Newport, making a case for the data provided by polls.

In addition to his Leading Voices lecture, earlier in the day Newport taught a session of the public policy course that is a companion to the lecture series. His son, Calvin Newport, is a member of the Dartmouth Class of 2004.

Newport’s book Religion Matters will be published in 2012. He is co-author of Winning the White House 2008: The Gallup Poll, Public Opinion and the Presidency (2009), and has written other books, as well as articles and opinion pieces that have appeared in The New York Times, the Los Angeles Times, and other publications. His weekly radio show What Are We Thinking? is produced and syndicated by Philadelphia NPR affiliate WHYY-FM.

Each Leading Voices lecture addressed a major topic shaping current policy and political debate at the national level. The issues included the federal deficit, health-care reform, public education, financial bailouts, and partisan politics. The series was sponsored by the Office of the President and Nelson A. Rockefeller Center for Public Policy and the Social Sciences at Dartmouth College.