Marcelo Gleiser calls himself “a scientist with a soul.” He is a serious scientist—a theoretical physicist and cosmologist—but he is also possessed by a desire to ask “the big questions,” bridging the gaps between science, philosophy, and spirituality. 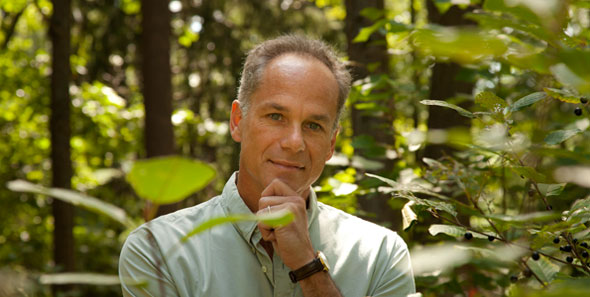 To do so he follows the path of the late astronomer and science popularizer Carl Sagan, to whom Gleiser has dedicated his most recent book, A Tear at the Edge of Creation (2010), which to date has appeared in 12 languages around the world. The book conveys a contrary yet convincing perspective on the natural universe. At its core is the argument that beauty does not lie in perfection, but rather in the imperfection that is inherent throughout nature.

In 1982 at age 23, the Brazilian government awarded Gleiser a grant to pursue a PhD in England, for which he felt a deep debt of gratitude to his native country. Recognizing this as a personal obligation, he consequently maintained his professional contacts there, frequently visited Brazil to give lectures, and even considered a permanent return. But after two rounds of postdoctoral studies in the United States, Gleiser decided to stay on and came to Dartmouth in 1991.

“Then, in 1997 when I published my first book, The Dancing Universe, its popularity changed everything and I started this parallel career as science popularizer both here and in Brazil,” Gleiser says. “In a sense, I feel that in this way I have been more useful to Brazilian physics and to the country than if I had simply returned after my PhD to be a professor there.”

The Appleton Professor of Natural Philosophy and Professor of Physics and Astronomy at Dartmouth, Gleiser is a tireless advocate of reaching out to further a public understanding of science. “I feel that my goal in life is not only to do physics but to also share it with the general public, to educate and to inspire,” he says.

Communicating science is a longstanding and honorable tradition. Perhaps the earliest example, Gleiser notes, may be Galileo. “He wrote for the people—in the Italian language they could understand, not in Latin like his contemporary scientists and theologians. He wanted people to understand his ideas,” Gleiser says.

Gleiser has published 12 books in his native Brazil, three of which he wrote first in English and then translated into Portuguese. For 14 years he has written a weekly column for Brazil’s largest newspaper, done documentaries for Brazilian television seen by upwards of 30 million people, and has also appeared in documentaries for PBS, BBC, and the History Channel. He regularly writes a popular blog for National Public Radio (NPR) that garnered more than 300,000 page views in July 2011 alone.

As a child, Gleiser once bombarded his father with the questions, “Why is the sun shining every day, and why is it going to keep shining, and is there life after death, and how did we get here?”

Today Gleiser is still asking questions, sometimes of a more philosophical bent—not surprisingly the philosophy of science—but always deeply profound. A Tear at the Edge of Creation offers us “a radical new vision for life in an imperfect universe,” as stated in its subtitle.

“When most people think of nature, they want to look for perfection and for symmetry and balance,” observes Gleiser. “But if you really pay attention you are going to see that what actually makes nature tick are the imbalances, the imperfections, the asymmetries.”

When things are perfect or symmetric, or when they are perfectly balanced, they don’t change, and change is at the very heart of nature, he explains. Nothing is static.

Gleiser does acknowledge that there are fundamental patterns of order in nature, a distinction he carefully makes in the book. “Science does look for patterns of order. That’s what we call the laws of nature—things that repeat.”

He alludes to snowflakes. No two are alike. As a drop of water freezes, small details of temperature, wind currents and other local factors will affect the ultimate configuration of the snowflake, making each one different. There will never be two that are exactly the same.

“And yet, they all have six points and they are all made of the same molecule of water,” Gleiser says. “So yes, there is that order, but overlaid on top of there is this disorder. And what makes snowflakes beautiful and interesting is precisely this interplay between the order and the disorder.”

Gleiser questions whether physics is insisting too much on this notion of perfection and unity. Going back to Einstein and with today’s string theorists, the Holy Grail of physics has been and continues to be a Grand Unified Theory of Everything. This is a concept Gleiser contends is both illusory and seriously flawed.

“After years searching for a ‘final’ answer, as a scientist and as a person, I realized that none exists. The force of this revelation was so intense and life transforming that I felt compelled to share it with others,” Gleiser says of the book.

Toward the end of A Tear at the Edge of Creation, Gleiser revisits more spiritual themes. As he also explains in his NPR blog, spiritual does not mean something supernatural and intangible. To Gleiser it means something natural, yet intangible, implying a connection to all things in nature and the universe. He quotes John Muir, who wrote, “When one tugs on a single thing in nature, he finds it attached to the rest of the world.”