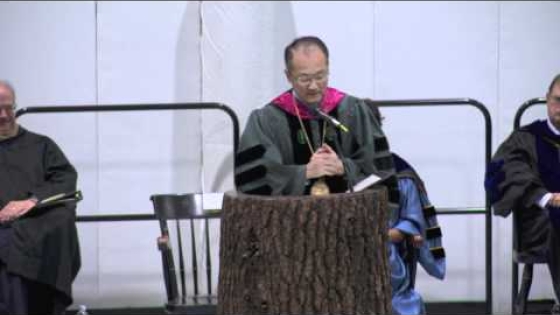 We gather every year on this occasion to reflect on the legacy left almost two-and-a-half centuries ago by the founders Eleazar Wheelock and Samson Occom:  to seek knowledge, educate the most promising students, and prepare them for a lifetime of learning and responsible leadership.

It is my pleasure to welcome the Class of 2015 to Dartmouth. You come to Hanover determined to learn, to be inspired, and to change the world. You are here because of what you have achieved and the promise of what you will accomplish. We’re certain that Dartmouth will provide you with all the tools you need to be transformative thinkers, doers, and leaders in the global community.

I also welcome the College’s new graduate students in the Arts and Sciences and those from Tuck, Thayer, and the medical school.  You will soon feel in your bones the strong community spirit that enlivens the academic life of this great institution. At Dartmouth, you will have unparalleled access to faculty who are leaders in their fields; this is the formula that has made us so successful for so many years.

I also want to thank Kul Gautam for joining us here in Hanover for this happy occasion.  Long before I knew much about Dartmouth College, I knew about Kul Gautum.  Kul was one of the most important members of the team at UNICEF that set out to tackle the problem of child survival with an energy and conviction that had never before been seen in the United Nations.  They moved heaven and earth to ensure that children would not die from diseases that are preventable by a simple vaccine.

What they did to convince the world to take on this challenge was simply extraordinary.  How did they convince the combatants in the civil war in El Salvador to agree to multiple cease-fires so that children could be vaccinated?   I think the seeds of that genius were sown right here on the Hanover plain where Kul studied international relations and founded the International Students Association.

Many of you will remember from Matriculation the story of the Fred and Milton Ochieng, who graduated from Dartmouth in 2004 and 2005.  Tragically, in the middle of their studies here at Dartmouth, Fred and Milton’s parents died of AIDS in their village in Kenya.

Just about the time Fred and Milton’s parents died, I went to UNICEF on a cool fall day in 2003 to talk to their leadership about an effort we had launched at the World Health Organization just a few weeks before.  The “3 by 5” initiative was an effort to increase the number of people in the developing world on treatment for HIV from barely over 100,000 to 3 million by the end of 2005–just two-and-a-half short years into the future.   Millions of people, like Fred and Milton’s parents, were dying needlessly every year in the developing world from this terrible disease.

But the people I had been meeting with in the UN system prior to meeting Kul were fearful and even dismissive when I suggested that the entire UN system should get behind this initiative to save many lives in Africa and other developing countries.  I walked in the room at UNICEF headquarters and began my presentation by telling them how their work in child survival and immunization had inspired me over the years, and I linked their work to what we were trying to do in HIV.  Most of the people in the room looked at me with an expression that long-serving international civil servants working in UN bureaucracies have perfected–inscrutable, polite, but utterly dismissive.  Kul, on the other hand, began with a warm smile, and as I talked more about his work with Jim Grant, he lit up.

After many hours of devastatingly disappointing meetings with UN officials all over the world, Kul, as the senior person in the room, told me that he learned long ago about the power of bold targets and that UNICEF would strongly support our initiative.  I’m not at all sure the others in the room agreed with him, but as the number two person at UNICEF and the number one person in the room, the UN’s respect for hierarchy meant that we had our first and most critical endorsement.   With Kul’s support, we began our seemingly Sisyphean effort to provide millions of people with HIV treatment[SD1] in countries, many of which didn’t even have functioning health care systems.  We didn’t achieve our goal by 2005 but we did by 2007, and in UN years, which feel slightly longer than dog years, that’s not bad.

What are the lessons from Kul’s story for an institution so committed to a broad liberal arts education?  They’re not simple.  Setting goals is important but not if they get in the way of understanding the moral and ethical implications of what you are trying to accomplish.  Being driven to achieve specific outcomes in the future can be critical but not if it means that you wait until that uncertain future to feel happy and grateful to be who you are today.

Here’s what I learned from Kul Gautam’s story, and this is what I’d like to leave you with as you embark on your journey here at Dartmouth.

First, believe finally that we really mean it when we say that every single one of you is now a part of Dartmouth and Dartmouth is a part of you.  No matter where you’ve come from or where you will go from here, the spirit of this place will always be, as we say, in your muscles and your brains.  As John Sloan Dickey used to say, “You are the stuff of this institution, and what you are, it will be.”  You now have the great good fortune of being linked, forever, through Dartmouth, to a great UNICEF hero.   And, through the transitive property of the Dickey dictum, we can also now claim for Dartmouth the estimated 250 million lives that Kul Gautam and the team at UNICEF helped to save.

Secondly, I want you to reflect a bit more on what it took for Kul and his colleagues to go to El Salvador, Iraq, Sudan,[and] Lebanon in the middle of their wars and insist on what they called “periods of tranquility” so that children could be immunized.  What enormous optimism they must have shared to think they could convince warring factions to cease fire and help to immunize children.  Kul Gautam worked in Haiti during the reign of terror of the Duvaliers and the tonton macoutes. He was the UNICEF representative in Cambodia when Pol Pot came to power.  He has witnessed first-hand some of the worst atrocities of the last half century, and yet, his optimism and hopefulness for a better world have never been stronger.  With a complete lack of naiveté and despite overwhelming evidence that has pushed so many others into cynicism, Kul Gautam remains one of the most optimistic people I know.  I think that he has reached this place because he understands that in his line of work, you do not become optimistic by looking at the evidence.  Optimism, you see, is a moral choice.  He has cultivated what the Italian philosopher Antonio Gramsci described as a pessimism of the intellect but an optimism of the spirit.

The great writer Tracy Kidder, after years of following my colleague Paul Farmer to some of the worst health disasters in the world, simply could not comprehend the optimism that flowed from Paul every morning while they were in the field.  During a long conversation with me, reflecting on his own cynicism, he humbly said, “In these awful situations, I guess cynicism is the last refuge of the coward.”

We will work with you tirelessly to develop your analytic skills so that your intellect will be wonderfully and appropriately pessimistic.  Nurturing the optimism of your spirit is your task.  Indeed, it is your duty.  But now, through knowing Kul Gautam, you know it can be done.

Over dinner last night, as I was telling Kul about what happens in front of the President’s House, sometimes on the President’s Lawn, on certain special occasions, he promised me that he’d come back to Hanover on Green Key Weekend and work to establish periods of tranquility right on Webster Avenue.  He’s optimistic, and he’s very good, but I’m not sure he’s that good.

We’ve been waiting all summer for you to arrive. We’re so happy to have you here, and now it’s my great privilege to welcome each and every one of you to the 242nd year of Dartmouth College.

Date
9/17/2014
Body
Dartmouth Now takes note when faculty and other members of the community weigh in on issues of the day. Here is today’s “Quoted”:“Asking...